Mazda says its next line of fuel-efficient SkyActiv engines could be as much as 30 percent more frugal than the current generation of its more eco-friendly powerplants. The new engines should appear in Mazda vehicles by 2018, and represent the main component in the company’s fuel efficiency strategy, president Masamichi Kogai told webmag Auto Express at the recent Frankfurt Motor Show. Meanwhile, Mazda is feeling out customer interest in hybrid and electric cars, and has appointed a special team to investigate the feasibility of reviving the Wankel rotary engines that were once a Mazda calling card. An earlier promise to bring a diesel engine to the United States might now hinge on whether getting one certified here would sacrifice its performance. 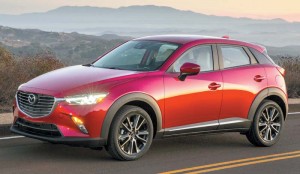 The next generation of SkyActiv engine could mean that vehicles such as the CX-3 would be as much as 30 percent better on fuel, without being a hybrid.