As it did with the Prius hybrid that began as a single model and grew into its own line of vehicles, Toyota might eventually do with its limited-production Mirai hydrogen-fuel-cell sedan, currently available in North America only in California and in very small numbers. Mirai chief engineer Yoshikazu Tanaka hopes one day a model lineup of fuel-cell vehicles will be the case. He didn’t propose anything specific model-wise, in an interview with British car magazine Autocar, as that won’t happen overnight, he said. It likely will take 10 or 20 years before fuel-cell cars achieve sales volumes in the neighborhood of today’s hybrids. Finding clean sources of hydrogen is also “still an issue.” 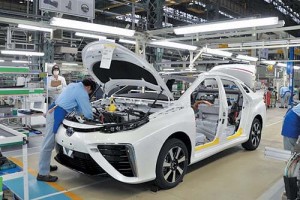 Toyota intends a whole line of hydrogen-powered vehicles, but that might be two decades into the future.