For years, the BMW 3 Series represented the German automaker’s smallest, most fuel-efficient offering, setting the benchmark since its debut in 1975 for premium compact cars in terms of efficiency, quality, ride, handling and performance. It has since been undercut in size by the 2 Series, 1 Series and the BMW-owned Mini brand offerings, but hasn’t suffered in popularity because of its smaller siblings, and is still widely considered the car to beat in its class. BMW recently delivered the 10-millionth 3 Series – which is a 320d (‘d’ signifies diesel) – at a handover ceremony in Munich to the vehicle’s buyer, driving-school owner Xaver Bittl who will use it for driver-training instruction. 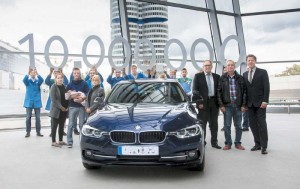 The 10-millionth BMW 3 Series is a diesel model that was bought by a driving school.