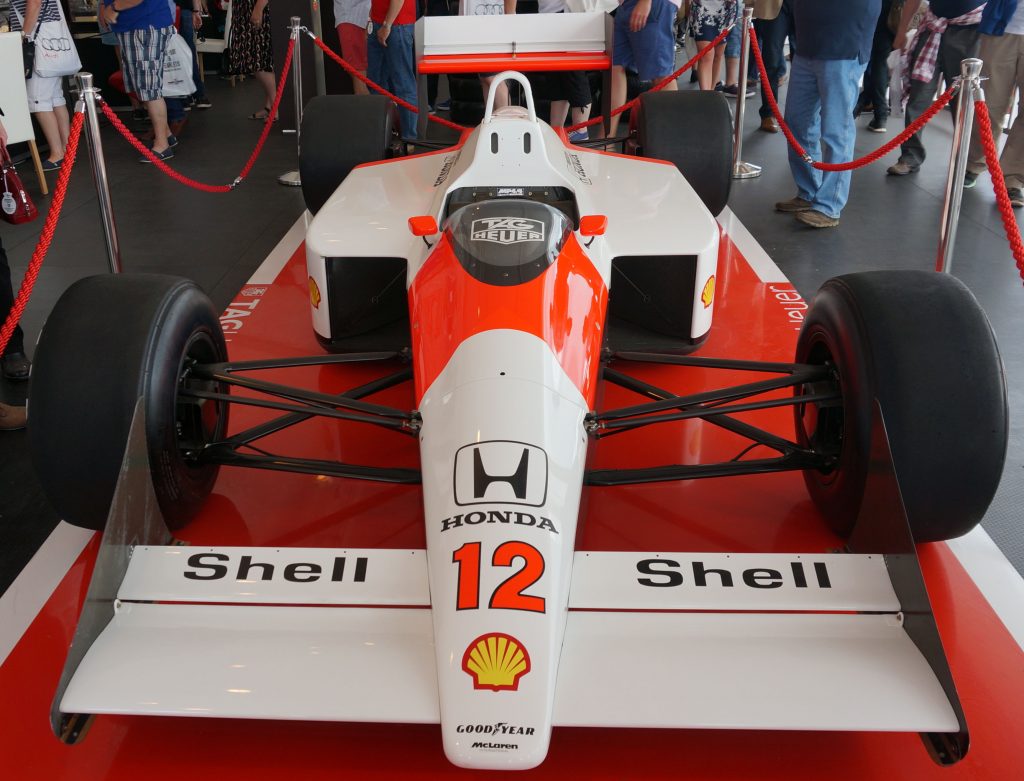 We caught ourselves leaning over the ropes to take photos of this priceless McLaren race car at the Goodwood Festival of Speed in England. When excited, it’s sometimes tough to be aware of your surroundings, but it’s a must to prevent a very expensive day. PHOTO: WHEELBASE MEDIA

People are excited and inquisitive, but also clumsy and careless by nature. How not to be that person and still enjoy the show.

It has been more than a year since COVID-19 gripped the world, essentially ending in-person events, car shows included.
As more Canadians are vaccinated, restrictions for gatherings will slowly ease and, one day, car shows will be back in full swing.
Logic points to huge attendance as people — tired of looking at the walls of their living rooms — enthusiastically reconnect with normal activity. Also logically, they’ll be out of practice regarding the etiquette and rules.
And no one wants to be that person, the one who dropped a bike on a fender, drove a stroller into a door or let their dog jump on a hood.
What happens then?
Actually, custom painter Serge Leger knows exactly what.
“You’re looking at maybe $8,000-$12,000 for a high-end paint job.
“And if it’s really custom and a repair can’t be made to match, you have to paint the whole car.”
That’s right, you scratch/ding/dent a show car and you’re on the hook for it. Such situations are completely avoidable by keeping some of the key unwritten rules of attending indoor or outdoor shows in mind. We all know not to touch, but that must be taken a step further to cut the risk of disaster.
Only bring what you need.

DON’T BE A JERK

This isn’t really all that complicated as long as you do what your mother told you and mind your manners.

1) Don’t touch anything, even if the owner of the vehicle is touching.
2) By all means bring the kids but be aware that a car show is a “show.” (Look, don’t touch.) Keep close contact. Even a small scratch can be expensive. Car owners should make the effort to chat up the kids.
3) Never ever ask, “how much is your car?” Instead ask, “roughly how much would it take to build a similar car?”
4) If you’re showing your vehicle, chat up the people who come by instead of sitting in a chair and doing a crossword.
5) If someone is taking a picture of your car, be courteous and ask if they would like one with the hood up. And every now and then, for your real fans, ask if they would like a picture of themselves behind the wheel. You’ve just earned your stripes as a good-will ambassador.

Lock your bike to a tree away from the cars and push a stroller, well away from the vehicle, with care. Don’t lean on anything. Don’t rest your hand on anything. Don’t get ketchup on anything. Don’t start anything on fire.
“Don’t touch means don’t touch,” says Paul Bourque, who routinely shows custom cars.
“But a big, big majority of people are great at car shows.”
However, there was this one time . . .
“A guy actually opened the door and sat at the wheel.”
Yes, there are still some people who give every show-goer a bad name. 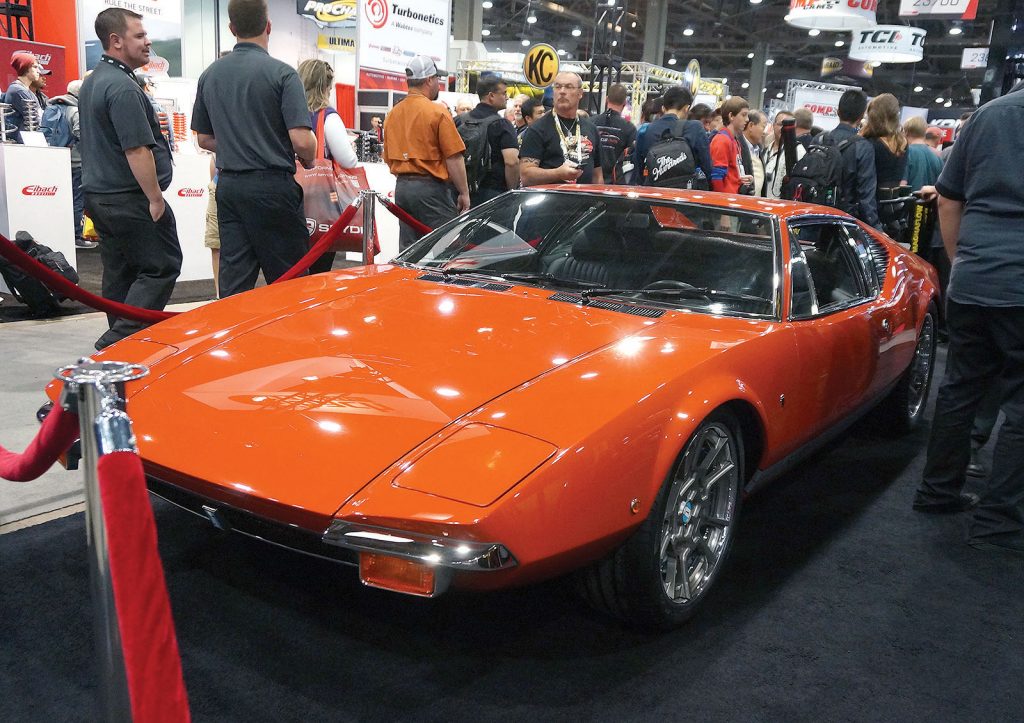 Ropes and posts mark the safe viewing distance. They’re not structural and therefore they’re not to be leaned on. Still, people do, risking knocking everything into the vehicle. That gets expensive on a $20,000 paint job.
PHOTO: WHEELBASE MEDIA

It’s why Leger, who shows several high-dollar custom cars, ropes off his rolling masterpieces whenever possible.
Sometimes you can’t, he says, like at outdoor shows where it looks ridiculous to rope off a vehicle, and that means owners need to be on guard and that show-goers need to understand what’s at stake.
“It’s a respect thing. If people knew how much time and money goes into these cars . . . and that you ended up in a fight with your girlfriend over it . . .”
Then, spectators might be more careful?
“Next to my family, it’s my second love.”
So, when someone drives a stroller into a fender, owners can become a little hot under the collar.
On the flip side, Bourque is equally annoyed with people who bring their cars to shows and then hide.
“They sit in lawn chairs in circles chatting among each other and when someone comes over to talk, it’s almost like they’re imposing. That really annoys me. If you’re at a car show, show your car.
“Car shows are entertainment and you’re part of the entertainment.”
Answering questions, often the same ones over and over, is part of what taking a car to a show is all about.
“If you don’t like doing that, then don’t take your car.”
Conversely, Bourque says spectators need to mind their manners and watch their tongues.
“A real hotrod guy doesn’t judge other peoples’ cars because even though you might not agree with what has been done to a vehicle, no matter the brand, you have to respect that it’s their car and it’s built the way they want with whatever funds are available.” 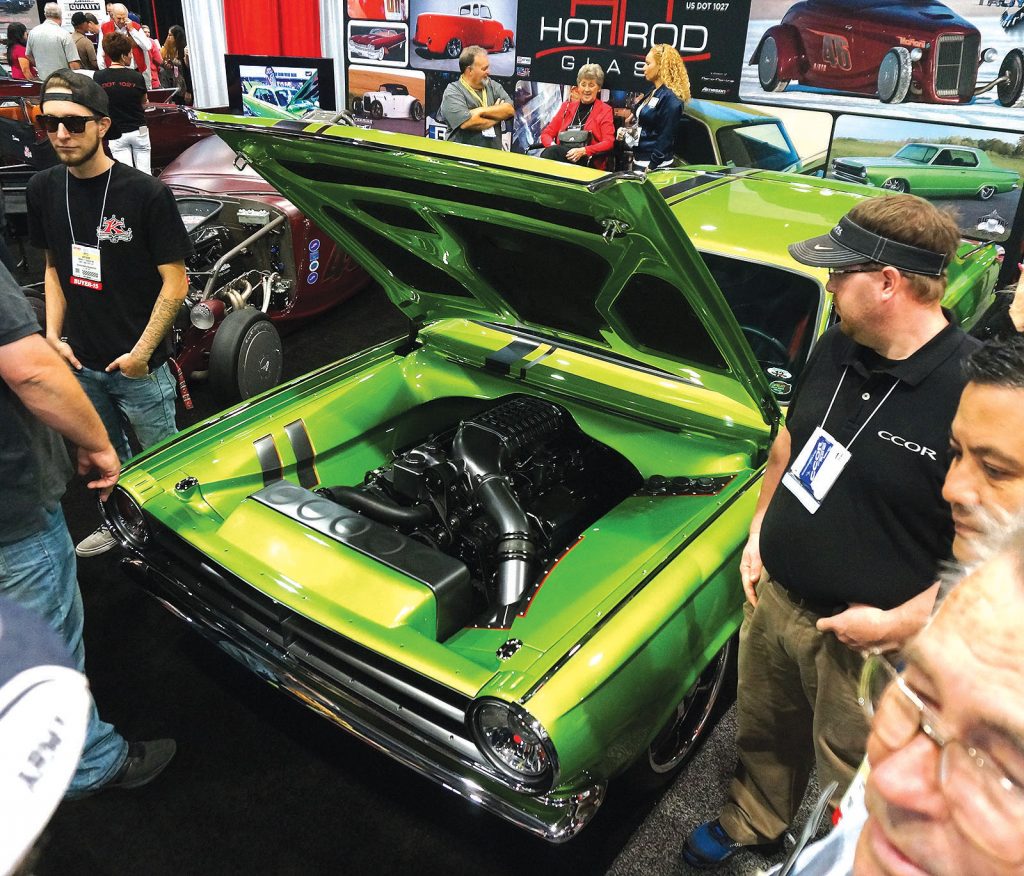 A scratch on just a small portion of this custom paint job could be tough to fix without redoing a large portion of the vehicle.
PHOTO: WHEELBASE MEDIA

“You know, we don’t bring cars to shows for judgment by people who haven’t done any of the work or spent any money on them.
“When someone does that, I simply ask them where their car is.”
It’s a respect thing, alright, and not just for spectators.
Bourque is quick to point out that it’s important for kids to come to shows to see the history and become interested in the hobby. And it’s up to the car owners to help educate. But there’s some parenting.

IT’S A SNAP
Taking pictures is a natural thing at a car show, but there are a couple of ways to make them much better.

1) Standing too close and using a wide-angle lens distorts the image and makes the vehicle appear disproportionate. Get back far enough so that you don’t have to use any wide angle at all.
2) Get used to using the flash in broad daylight. A good trick is to put the sun behind the vehicle (position yourself) and flash the shaded side. Dark cars on bright days usually require flash from any angle. If you can’t put the sun where you want it, wait until later in the day.
3) Lower the camera to about waist height for better perspective.
4) If there’s a picture you want and can’t get, ask the owner. We’ve never been turned down to lift a hood or open a door.
5) The best pictures are usually at the very end of the show when the crowds have thinned (few heads in the way) and when the sun is lower in the sky (warmer light).
6) Filling the viewfinder with the subject always makes for better pictures.

“I don’t blame any small child for they way they behave in public or around a $100,000 car. I blame the parents when something goes wrong.
“Kids are just kids. They need to be constantly reminded to keep off things. It’s just what kids do. But this isn’t a muddy-shoes-off-the-clean-floor thing. There are no second chances.”
But just as it takes something small to ruin your day, it only takes something small to make it a great one. And, yes, flattery will get you everywhere.
“One time, a guy came over and asked if he could take a picture of the car. A couple of weeks later he came back with a tattoo of it on his arm.
“You’ve gotta love that.”

Super wash: By machine and by hand, we experiment with a German supercar