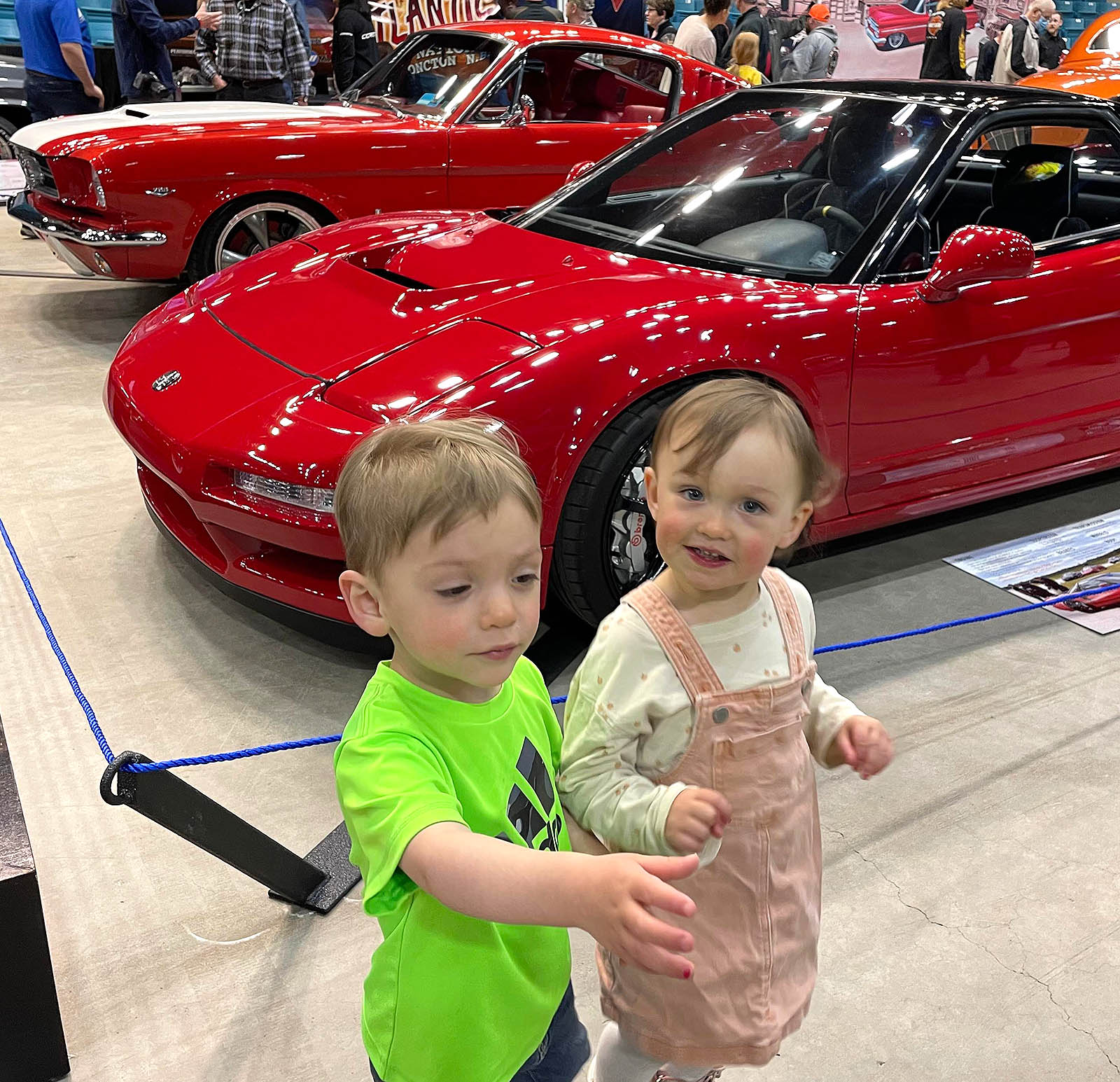 Moncton resident Frank Jobin brought his twins to the 2022 Radical Speedsport, their first car show. They were born and six months later COVID-19 arrived to shut down the world. PHOTO: FRANK JOBIN

With a break in the cloud cover of COVID-19, organizers seized the opportunity and hammered together the Moncton car show in six weeks instead of the usual six months 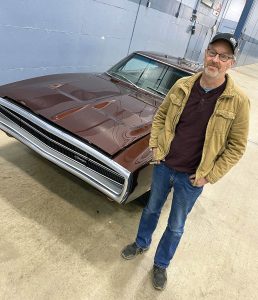 Car builder Mike Arnold from Woodstock, N.B., uses the Radical Speedsport show as a deadline to complete his vehicles. His 1970 Dodge Charger took about a year to complete, although supply-chain issues delayed some parts for months. PHOTO: JEFF MELNYCHUK

A year ago, crowds were lined up for COVID-19 vaccinations at the Moncton Coliseum. Now they are lined up to see cars.
It’s a coin toss as to which is more surreal, but Frank Jobin was here then and he’s here now.
As a father of twins born nearly six months before New Brunswick government restrictions forced the cancellation of the 2020 Radical Speedsport car show in Moncton, it was anyone’s guess how his toddlers would do in a crowd. With government-imposed rolling lockdowns, family bubbles and so-called circuit-breaker restrictions, they had never actually been in one.
If Moncton is considered a car-show town, you might never know it. The last Speedsport was three years ago in 2019.
Just as important for Jobin, the 2022 show — resurrected for April 22-24 at the Moncton Coliseum — was a chance to drop his kids into a life-size Hot Wheels toy box of nearly 300 vehicles. For real. For the very first time. Just don’t touch.
“I thought their heads were going to explode. Their eyes were going in every direction.
“I was apprehensive at first but in the end it was like going to the grocery store . . . only that if they broke something it would be very costly,” Jobin laughed.

For countless youngsters, it was their first car show, filled with big shiny things, popcorn, fudge, T-shirts and people. Many people. 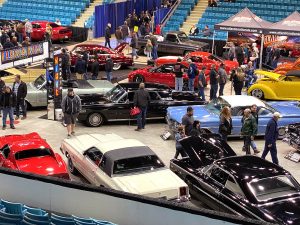 For exhibitors, getting back to shows is about connecting with friends, said Boyd Driscoll of Charlottetown, P.E.I. “That’s kind of the best thing . . . you get to mingle with [other car owners].”
PHOTO: JEFF MELNYCHUK

And exhibitor Boyd Driscoll from Charlottetown, P.E.I., was mostly excited about the people. Aside from those three missing years since the last Speedsport, the 2022 event was extra special because it was his first time bringing his 1937 Ford Business Coupe. He purchased the car two years ago.
Driscoll said he’s a regular at Speedsport as well as the summer Atlantic Nationals outdoor car show in Moncton, but on-again off-again pandemic-related border restrictions prevented leaving the island to attend them.
Getting back to shows, then, is mostly about connecting with friends.
“That’s kind of the best thing . . . you get to mingle with [other car owners],” Driscoll said.
Because some of them are older, “Some of them have passed away . . . and you never got to have a chat with them before . . . now they’re gone and the last time I saw them was three years ago, and we had a great time.
Car builder Mike Arnold from Woodstock, N.B., 270 kilometres west of Moncton, said he shows his completed project cars only at Speedsport.
“I’m the kind of person I need a deadline and that’s what’s nice about this show.”
The cancellations in 2020 and 2021 therefore created a sense of suspended animation. He brought two cars this year, the most recently completed — essentially the day before Speedsport — being a 1970 Dodge Charger 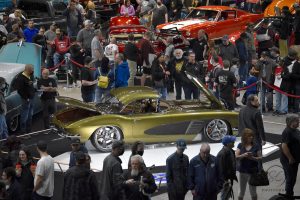 The 1962 Corvette — dubbed the ZRC1 — was built by AJM Classics in Moncton for a U.S. customer. It was the winner of the inaugural Greg Turner Style Award.
PHOTO: SARAH COMFORT PHOTOGRAPHY

that took about a year.

Joe Savoie, owner and producer of Radical Speedsport, said it normally takes six to seven months to put the event together, but the unpredictability of COVID-19 delayed a commitment to hold the show. That meant only six weeks to make it happen.
PHOTO: TANYA EVERETT PHOTOGRAPHY

The road to restoration is growing longer, however, with global supply-chain issues.
“The pandemic has made parts extremely hard to get. When I’m building a car, I have to order the parts six months in advance or I’m not going to have them,” Arnold said.
Despite this, the three years of building time yielded some astounding Speedsport debuts, such as the show-stopping 1962 Corvette — dubbed the ZRC1 — built by AJM Classics in Moncton for a customer in the United States.
“One thing that really struck me this year, especially, is the Maritime builders,” said Arnold. “There are so many shops building, and [they have years of work]. The Americans are smart. They know they can get stuff built [in Canada] and get it built cheaper [than at home].”
Ultimately, though, vehicles are built to move, but government restrictions on gathering during the pandemic meant little opportunity to see the vehicles in the wild.
“For me, I miss the Atlantic Nationals [summer outdoor car show] and the cruising around, and we didn’t do that for two years,” Arnold said.
“These cars are artwork in motion. They look even better going down the road. You can look at them in here and they look awesome, but when you see that same vehicle driving by you, it looks 10 times better.
You get the visual and the audio and the motion.”

THE RACE TO MAKE A SHOW 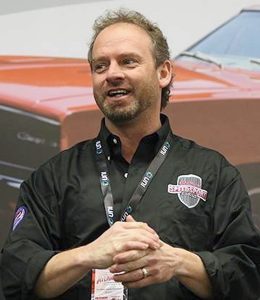 Debuting a fresh car would be enough for most people, but Joe Savoie, owner and producer of Speedsport, also had to create the show to put his custom 1950 Buick Special into.
PHOTO SUPPLIED BY JOE SAVOIE

Debuting a fresh car would be enough for most people, but Joe Savoie, owner and producer of Speedsport, also had to create the very show to put his custom 1950 Buick Special into. The wrinkle? The car took eight years to complete, but he only had a matter of weeks to pull off event.
“This year, because of everything I had gone through in the last two and half [with the unpredictability of COVID-19], I didn’t start doing any real planning until about six weeks out, so this is done in a very condensed timeframe. I didn’t think I would be able to pull it off, get everything I wanted inside in six weeks . . .
Even so, the narrow window impacted marketing efforts as Savoie instead burned the midnight oil to fill the multiple show surface with vehicles and vendors.
“That’s what happens when you work in a condensed timeframe, you are going to lose certain things.”

The 1955 Chevrolet by Cleveland Design, owner Dave Cleveland, of Rothesay, N.B., was one of many high-level vehicles shown at Speedsport. “This is the best class of cars we’ve ever had,” said show owner and producer Joe Savoie. “The caliber is very, very high.”
PHOTO: JEFF MELNYCHUK

And, potentially, exhibitors and spectators shaped by two years of pandemic life.
What helped was that the car community was “all in.”
But would there be crickets when the gates opened?
“We kept our expectations low . . . maybe not on the participant side because that was through the roof, but on the attendance side . . . because we know there’s still a lot of COVID fear.
“[Attendance] is in line with years that we’ve had good shows . . . not the record-breaking stuff, but we attribute [that] to COVID. What were the fears, the wariness of staying in hotels, eating in restaurants, being in crowds, lining up to see guests, some [attendees] with masks, some without.
“Everybody is trying to do the best they can with a situation that we can’t control and we don’t know anything about, so are wrong decisions made? Abso-freaking-lutely. But there’s no real blame to lay because you just don’t know what’s around that next corner.”