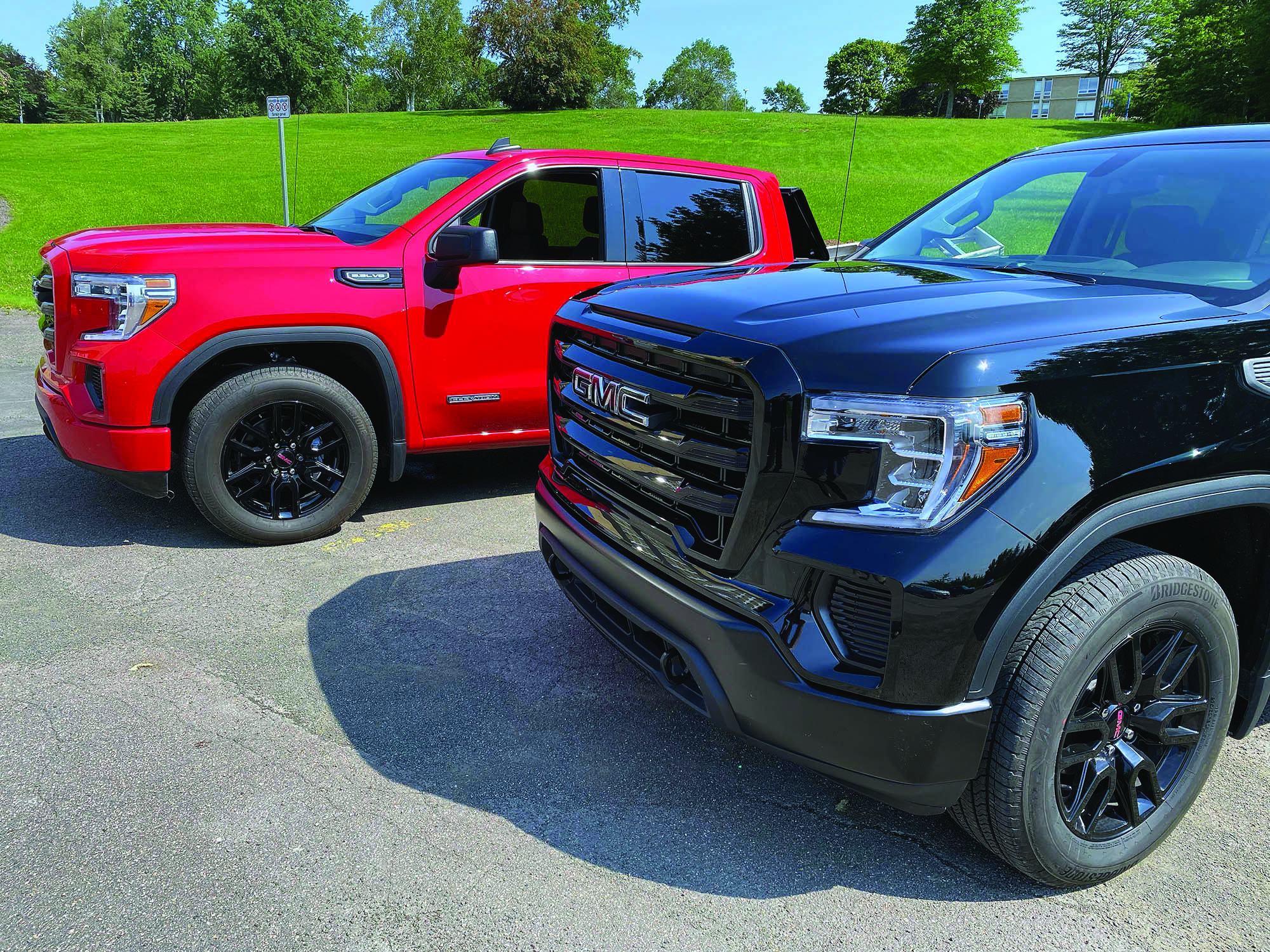 The red Sierra arrived in Elevation trim and was equipped with a 355-horsepower 5.3-litre V-8. The black pickup, in base trim, came with a 310-horsepower turbocharged 2.7-litre four-cylinder. The red Sierra cost about $9,700 more. PHOTO: WHEELBASE MEDIA

The V-8 has twice the displacement of the four-cylinder
and should prevail, but that’s not the only number that matters

No matter how good it is, a full-size pickup with a four-cylinder engine has an uphill climb ahead of it.
“A four-cylinder?”
Right off the bat, it has an image problem. The category is ruled by V-8 engines and numbers; the bigger the better for towing capacity, payload and horsepower and torque. That’s what the Detroit Three marketing departments have drilled into us for decades in their high-stakes battle of one-upmanship with each another. 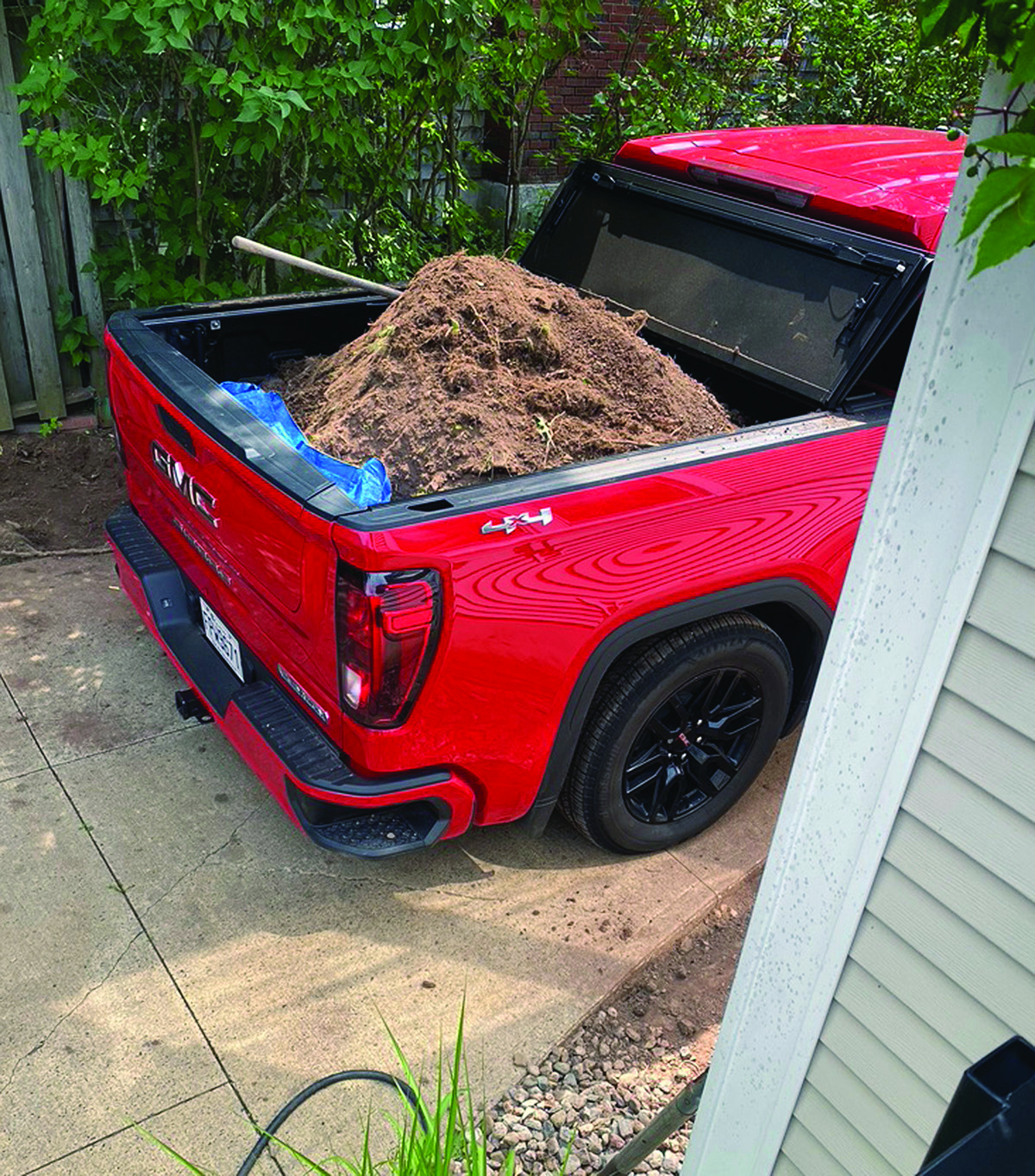 The short bed’s box is two inches shy of six feet in length. It will swallow enough dirt to push the fender surrounds close to the tires. The payload rating for the 5.3-litre V-8 Sierra is 2,485 pounds (1,127 kilograms), which is about 14 per cent greater than the four-cylinder rating. PHOTO: WHEELBASE MEDIA

Knowing that, which of the following do you think is better? A 2021 GMC Sierra with a 355-horsepower 5.3-litre V-8 (with 383 pound-feet of torque), or a 310-horsepower turbocharged 2.7-litre four-cylinder (with 348 pound-feet of torque)?
Pickup doctrine makes this an easy choice: The 5.3-litre V-8 wins, hands-down. More is more and less is less, right?  Well, two more important numbers to consider are fuel consumption and base price. Here, less actually is more and the four-cylinder wins out, making it something of a paradox.

GM Canada provided the 2.7-litre four-cylinder wrapped in an all-black base 4×4 crew-cab short-bed Sierra. Price: $43,998 plus $1,900 in destination charges, and about $4,000 in options including the black 20-inch wheels, a 120-volt power outlet on the instrument panel, SiriusXM and a Sierra Value Package. 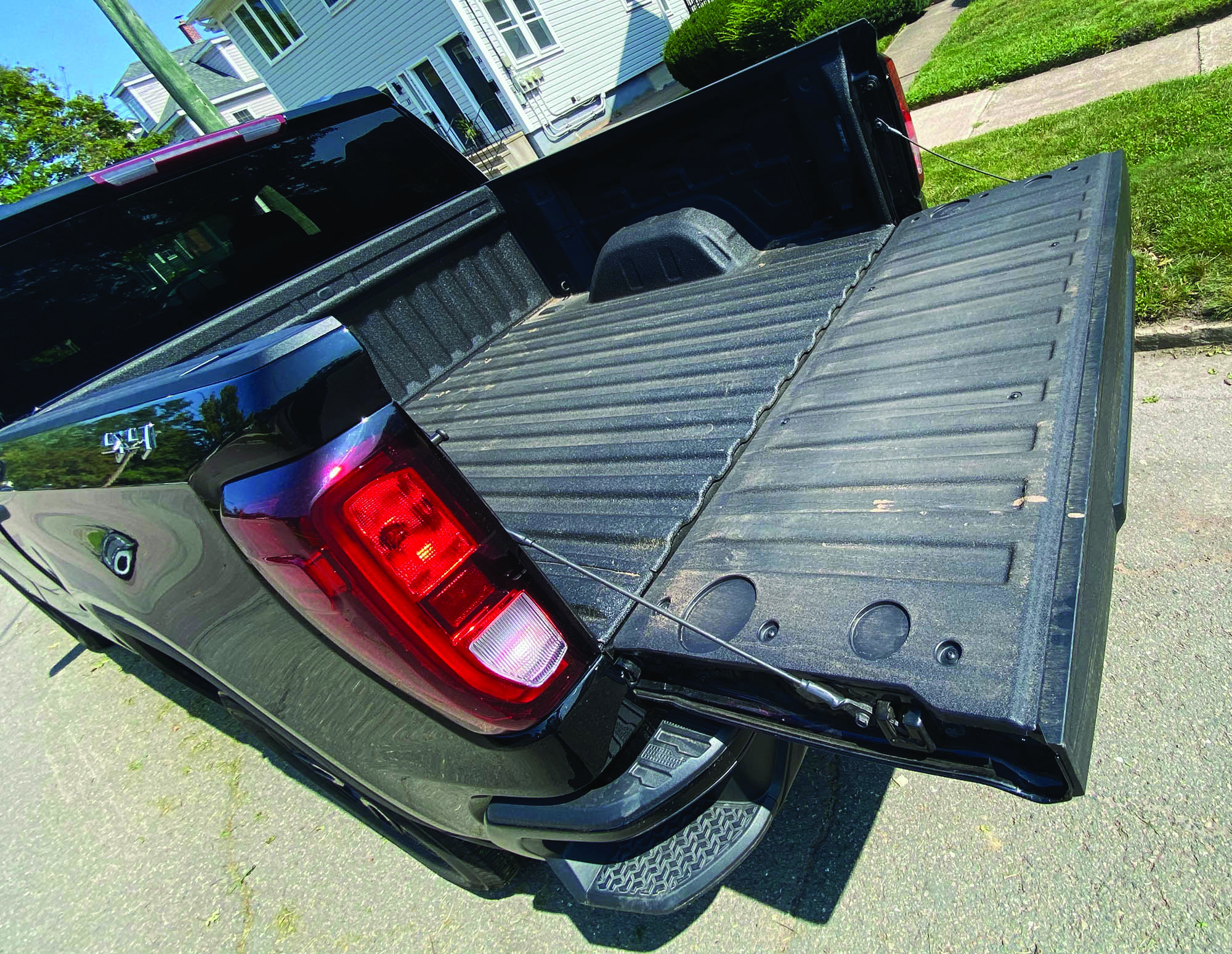 The black four-cylinder Sierra came with the standard tailgate and a bumper with corner steps.
PHOTO: WHEELBASE MEDIA

The V-8 was nestled inside the much more expensive Sierra Elevation model, in red, with a long list of features. Base price: $55,398 plus $1,900 destination. Price as tested: $57,543 plus destination.

Several other engines are available, most notably the 3.0-litre six-cylinder turbo-diesel and the 6.2-litre V-8, although its optional only for the top-level Denali trim.
The 2.7-litre four-cylinder is the base engine in the Elevation, with the 5.3 V-8 costing an additional $1,845. In the lower SLE trim — between the base and the Elevation — the 5.3 costs $1,775 more, according to GMC’s online configurator.
Both supplied pickups were equipped with eight-speed automatic transmissions.
According to GMC’s website, the 2.7 is rated at 13.0 l/100 km in the city and 11.4 on the highway. The online configurator lists the V-8 at 17.3/11.8, but with a six-speed automatic transmission and not the eight-speed.

THE FOUR-CYLINDER IS THRIFTY

The quick math: The 2.7 uses about 25 per cent less fuel in city driving than the V-8 does. With fuel prices in many locales across Canada now above $1.50/litre, 25 per cent is a number that could be just as important as horsepower, torque and towing. Especially when those numbers might not be entirely relevant.
While the Detroit Three have been busy one-upping each other, the fact is most of their full-size pickups have capabilities beyond what the average Canadian buyer will ever need.
The maximum-tow rating for both the V-8 and four-cylinder is 10,900 pounds (4,940 kilograms), according to GMC’s online configurator. For perspective, consider that a size-large 30-foot (9.2-metre) Airstream trailer weighs about 7,300 pounds (3,320 kilograms).

GET THE ENGINE FOR THE JOB

That doesn’t mean if you own a size-large Airstream trailer you would pick the four-cylinder Sierra to haul it across the country. The nod might go to the 3.0-litre turbo-diesel with its greater peak torque (460 pound-feet) that would tow with less effort while also returning respectable fuel consumption at highway speeds. The point is the four-cylinder can do short, heavy halls when needed. 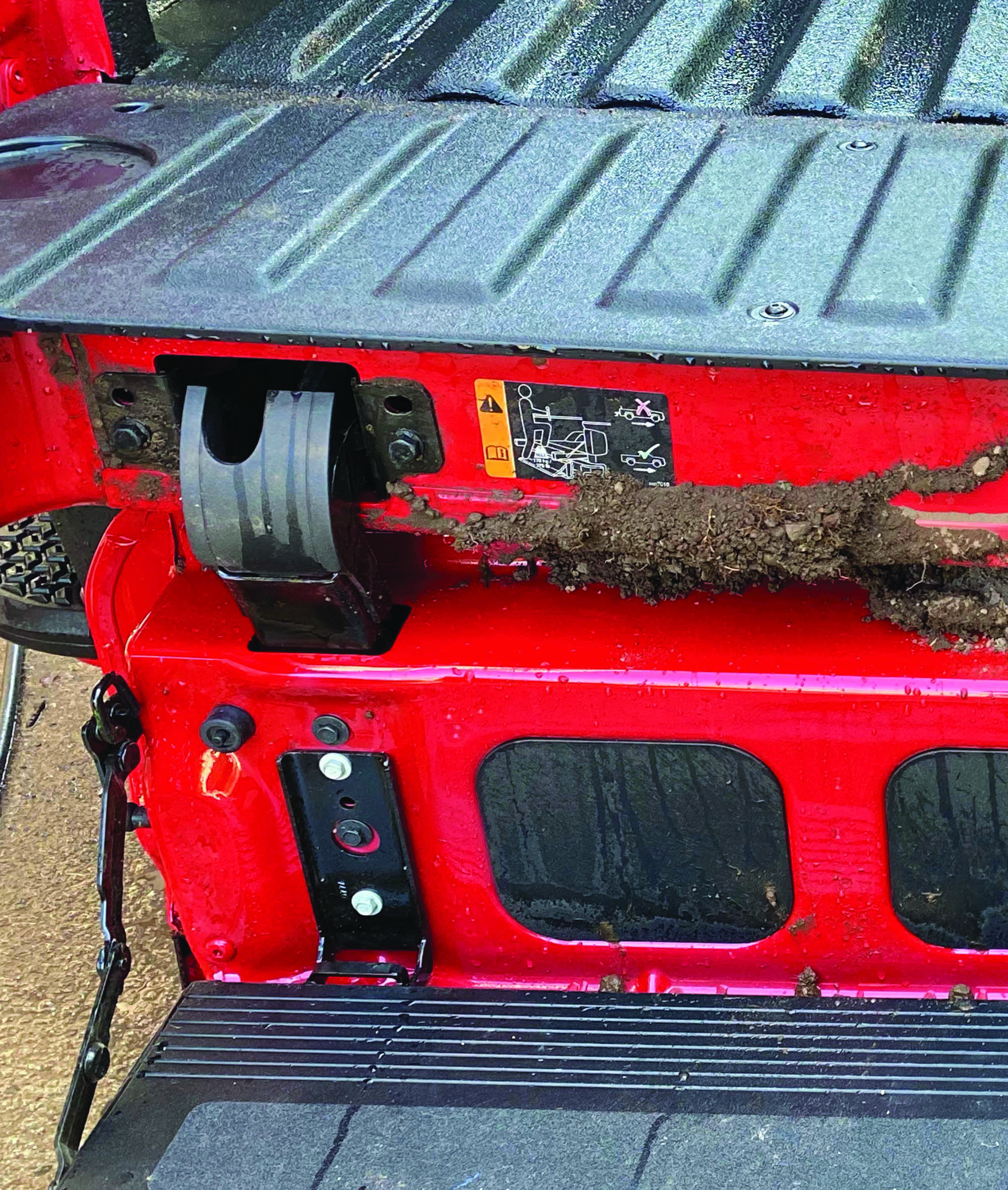 The red V-8 Sierra was equipped with a tailgate that had a fold-out step. Dirt and rocks found their way inside the tailgate shell through the hinge openings.
PHOTO: WHEELBASE MEDIA

In terms of payload capability, the four-cylinder short bed is rated at 2,185 pounds (991 kilograms) while the 5.3 V-8 is slightly higher at 2,485 pounds (1,127 kilograms). That’s not a half-ton truck, it’s a one-ton truck. It’s enough to carry three size-large all-terrain vehicles in the back, if they could be made to physically fit. The four-cylinder is rated at slightly less, but will it matter to you?
The test vehicles easily lugged large loads of dirt without much fuss, although they were definitely riding low on the back and light on the front.
Generally speaking, the four-cylinder, despite being a four-cylinder, is plenty for most needs and it drives like it is a much bigger engine.

You might think it would be slow to react to throttle inputs, especially in a big, heavy vehicle. Surprise, surprise, when pulling away from a stop, it has noticeably sharper response and more pep than the V-8. This is important because you won’t be regretting your purchase every time you pull away from the house in the morning. It doesn’t have the rumble the V-8 has, but the four-cylinder makes delightful turbocharger chirps and whistles.
Both the supplied pickups were capable. Of that there is no question. The V-8 model had more features, such as grab bar for climbing in and out of the bed. It also had the tailgate with the step, although dirt and small pebbles found their way into the tailgate’s shell to rattle around.
But it was the base-trim four-cylinder model I wanted to keep after the comparison. It had just about everything you would need, including a good price and fuel economy. Two very important numbers.