Original technologies have made Honda’s tentatively named FCV fuel-cell vehicle – one of only a few hydrogen-powered sedans beginning to come to market – to house its entire powertrain in the same space that a traditional internal combustion engine and transmission would occupy. Just two decades ago, fuel-cell powertrains were on average the size of a minivan, making Honda’s achievement no small feat. The car was set to debut at the Tokyo Motor Show in late October, featuring a full cabin that seats five adults and a claimed range of 437 miles. “Exhilarating driving” is made possible by two high-output motors, Honda said. The Japanese-specification FCV can also act as a mobile power plant during electrical outages, and in remote areas. 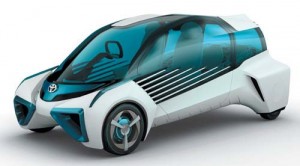 The frumpy looking Honda FCV is actually hiding hydrogen-fuel-cell technology no bigger than the usual gasoline engine and transmission.