An electric transit bus that can serve any typical transit route in the United States has been developed by Proterra of Greenville, S.C. The company says its Catalyst XR model achieved 258 miles on a single charge circulating a test track at 30 mph, giving it the best efficiency rating ever for a 40-foot bus, almost 100 miles more than China’s BYD electric bus. The bus tested was fitted with a new generation of storage technology developed by Proterra and comprised eight battery packs. The body is aerodynamically designed and made from lightweight carbon fiber and other advanced composite materials. Proterra says its 10-pack XR configuration could exceed 300 miles on a single charge. 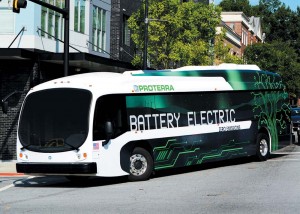 Large vehicles that stop and go are excellent candidates for electrification. They’re large enough to carry the batteries and they don’t add pollution to already-congested urban areas.