All hot, turbocharged romances are a bit stormy . . .

DIRT ON GARRY
In 1989, Garry led a team that took a disassembled suzuki to the top of toronto’s CN tower, then the tallest building on earth, where the car was put back together.

The shade of this Mercedes should be a lipstick colour because I want to kiss it all day long.

Heck, I would kiss the CLA 250 no matter what colour it was and that’s not overstating things one bit.

There are two signs that I’m in love with a car. First, if I want to wash it. And I washed the CLA not once, but twice. Second, if my heart breaks when Garry takes it away at the end of the week. I was literally crawling on my hands and knees on the asphalt calling out its name when Garry sped off. Broken heart. Sigh.

I also know I’m in love when I put up with quirks I wouldn’t normally put up with. Happily so, even, just so I can get the good stuff. And the CLA 250, especially in red, has a lot of good stuff . . . but a few quirks that one must put up with, too.

As Mercedes’ entry-level four-door sedan, the CLA 250 doesn’t look entry-level. It’s just plain sexy. Kissable, even. Obviously. In base trim at about $34,000 it’s actually a bit basic and the turbocharged 2.0-liter four-cylinder only drives the front wheels with its 208 horsepower. Nothing too special here. The lipstick red car – Jupiter Red, according to Mercedes – that Garry dropped off is “4MATIC” all-wheel-drive and has the AMG Sport Package that includes some dressy items and grey 18-inch wheels. The car is simply stunning and one of the few cars that people have actually gone out of their way to compliment me on while I’m driving.

Its gorgeousness actually overcomes a few glaring dislikes, the most significant being the gear-shift stalk on the steering column. On several occasions in the rain, I flicked it up thinking it was the wiper toggle. Messing with the gear lever at highway speeds? Not cool, as it turns out. Up means neutral.

The second thing is the soft throttle response in the lower rev range. Sometimes you push the pedal and the car literally does nothing, which is not what you want when trying to make a left turn in oncoming traffic. Other times it would dart around like a terrier on a loose leash. In a word, unpredictable. And that doesn’t inspire confidence.

The way around that, as you learn fairly quickly, is to keep up the engine revs and manually shift, up and down, with the steering-wheel-mounted paddles. If that’s how you like to drive, then you’re good to go, otherwise you’ll need to build in a delay factor in your driving.

The third thing is that, as gorgeous as it is, there’s no getting away from the fact that the CLA 250 is punching a bit above its weight class and it shows in a couple of places, most notably a cake-layer-like rubbery dash pad and a jutting information screen that looks tacked on atop the centre stack.

However, the negatives are quickly drowned out by the positives, which is kind of how things go when you’re in love with someone, or something.

It drives great, looks even better and is priced on par with higher end Ford Fusion and Toyota Camry models, which shouldn’t worry more mainstream brands, but will likely entice buyers looking for a little more romance from their automobile.

WOW: Just look at it. Wow. Supermodel appearance on a family-sedan budget.  Shifts great. Doors have no window frames, which cuts down on stabbing injuries. 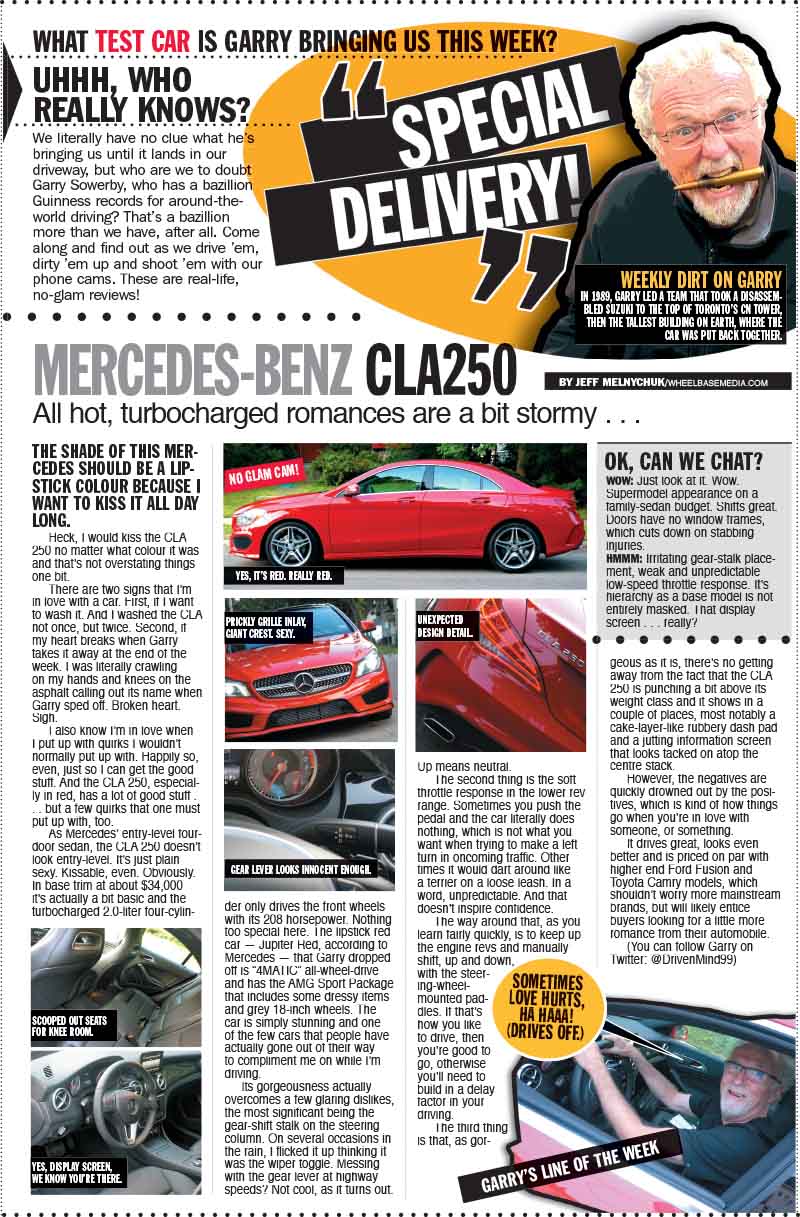