According to Bob Lutz, when product is dictated by “bean counters,” everyone loses.

Bob Lutz has never been one to shy away from controversy.

Now 82 years of age, the Swiss-born, Berkeley-educated former vice chairman of General Motors is one of the true legends of the global auto industry, working in executive positions for BMW, Ford Motor Co. and Chrysler before helping turn the nation’s biggest automaker around.

By his own definition, Lutz is a “car guy,” someone who lives and breathes automobiles. It is therefore no surprise that he regards the enemy of automotive greatness to be corporate finance managers. And it’s even less surprising that one of his books  is the 2011 “Car Guys vs. Bean Counters, The Battle For The Soul Of American Business.”

Over his career, Lutz has fought numerous battles, with Lee Iacocca at Chrysler, former Ford CEO Red Poling and with the U.S. Congress during federal bailout hearings for GM in 2008. When legislators demanded that then-GM CEO Rick Wagoner resign, Lutz told the New York Times, “This has nothing to do with trying to improve the executive team. This is the equivalent of the Incan or Mayan days when everybody would go to the top of the volcano and throw a virgin in. It’s the feeling that if we make a sacrifice that somehow the gods would be appeased.”

“Maximum Bob,” as he is known in the industry, helped develop some of the most significant vehicles to roll out of Detroit, from the Dodge Viper sports car, to the successful Ford Explorer and the Chevrolet Volt gas-electric car.

Although no longer with GM, he is still heavily involved in the car world and began a business consulting company as well as founding car company VL Automotive.

In an industry full of stuffed shirts, Lutz has always been flamboyant and outspoken, the cigar-and-martini-wielding big thinker who pilots jets in his spare time. Lutz championed great cars and pilloried small minds throughout his career.

But, as you can imagine, Lutz made plenty of enemies over the years, including Iacocca, who to his later regret refused to make Lutz the chairman of Chrysler.

“Don’t lament the eventual silence of the Last True Car Guy . . . he’s entertaining. But he’s just as responsible for decimating Detroit as everyone else of his generation,” wrote BNET.com’s Matthew DeBord.

One of Lutz’s more intriguing theories is why the bean counters and not the car guys took over Detroit’s Big Three in the first place.

“Well, guys like me who questioned the system and questioned all the analysis and would much rather do it with the right side of our brains, with intuition and new ideas, seldom make it to the top of organizations because we’re not well enough organized, we don’t have all the quantitative data, we don’t have the studies, we don’t have the focus groups,” said Lutz. “We say ‘I think we should’ and the guys say, ‘Where’s your data?’

“The notable exception to this was Steve Jobs but Steve Jobs was the owner and the founder (of Apple). He did get kicked out once and they had to bring him back. But Steve Jobs was an absolutely unique case. Normally business focuses on the guys that run the numbers that have all the answers.”

That said, Lutz is of the ironclad belief that businesses should be run by product people, not by accountants.

“It applies in any business,” he said. “Shoemakers should be run by shoe guys, and software firms by software guys, and supermarkets by supermarket guys. With the advice and support of their bean counters, absolutely, but with the final word going to those who live and breathe the customer experience. Passion and drive for excellence will win over the computer-like, dispassionate, analysis-driven philosophy every time.”

“And if you shave costs out and head for mediocrity and think you’re going to get rich that way, as the American car industry found out for the last 30 years, that’s the road to ruin. It’s a race to the bottom. Many American industries have suffered from the same fate.” 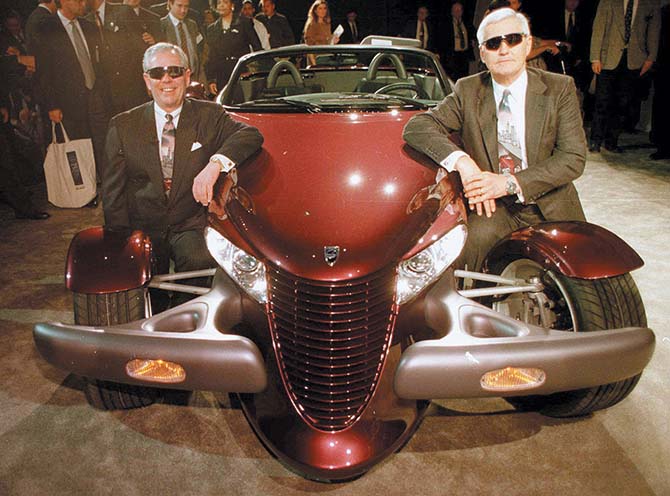 Bob Eaton, far left, and Bob Lutz at the unveiling of the Plymouth Prowler in the mid-1990s. Lutz believes it’s just common sense that business has to be about the product, with advice from the “bean counters.” 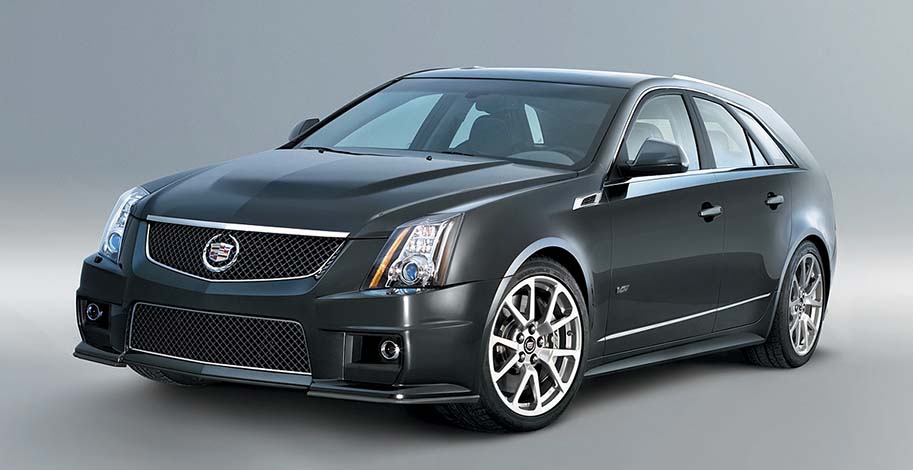 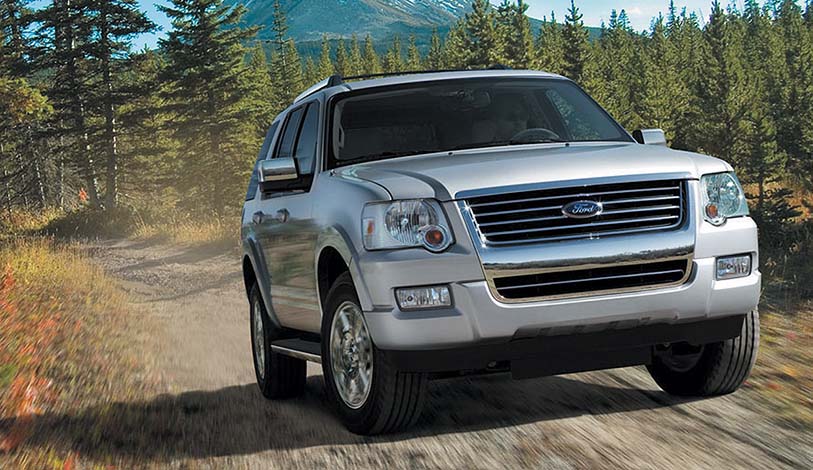 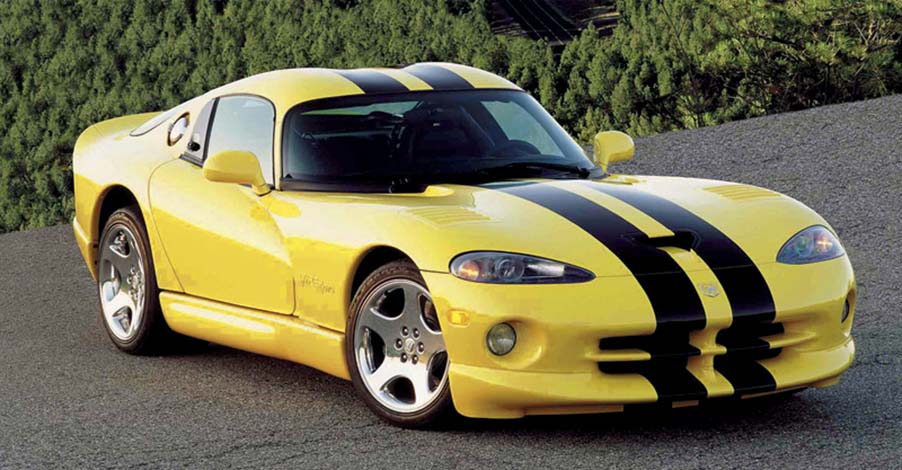 With Bob Lutz in charge, there were many creations, including (top to bottom) the Cadillac CTS-V wagon, the Ford Explorer, the dramatic change in interior quality at General Motors and, of course, the Dodge Viper. 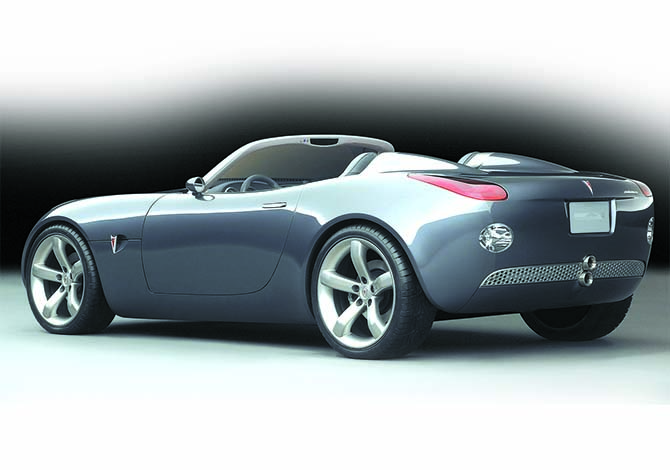 Bob Lutz’s core principle is simple: you have to love cars to offer product – such as the Pontiac Solstice – that car lovers would buy. Unfortunately for many companies, when accountants are put in charge, the emphasis is no longer on product that sells, just the bottom line. And that’s not how businesses are built.

Tom Jensen is feature writer with Wheelbase Media. You can reach Wheelbase online at www.theoctanelounge.com using the contact link. Wheelbase Media is a worldwide provider of automotive news and features stories.