That’s what The Sleuth is hearing from his usually reliable sources. They claim that the piston-less powerplant, which was designed by German engineer Felix Wankel and successfully developed by Mazda of Japan, might be revived as the primary means of propulsion for a brand new sports model. The rotary was last used in the automaker’s RX-8 2+2 model that bowed out in North America in 2011. That car was lauded for its smooth power, although detractors felt the rotary’s thirst for fuel coupled with a lack of torque negated some of the benefits. Assuming that Mazda has addressed both issues, The Spy Guy would be thrilled to see Herr Wankel’s invention literally spin its magic once more. 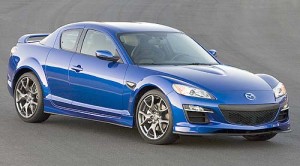