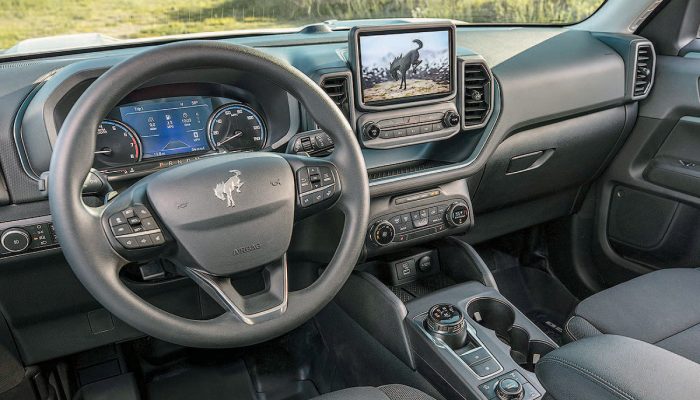 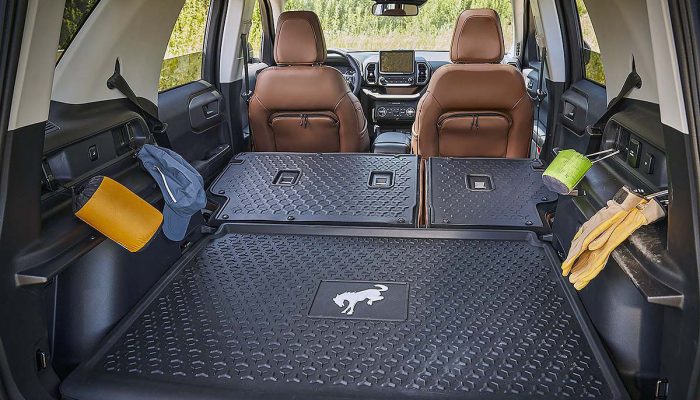 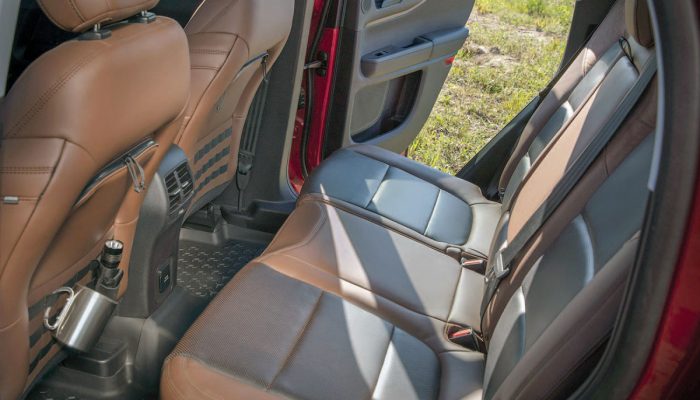 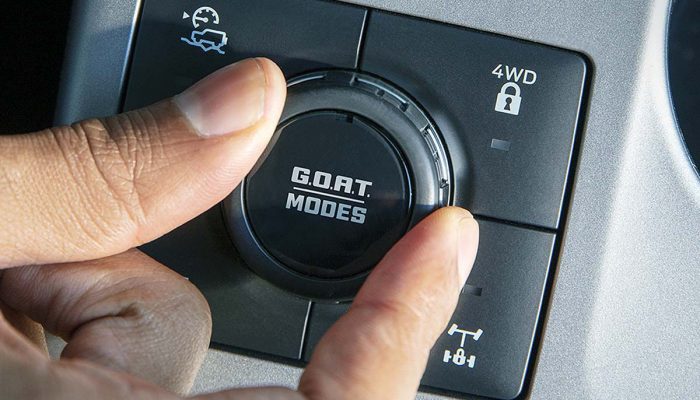 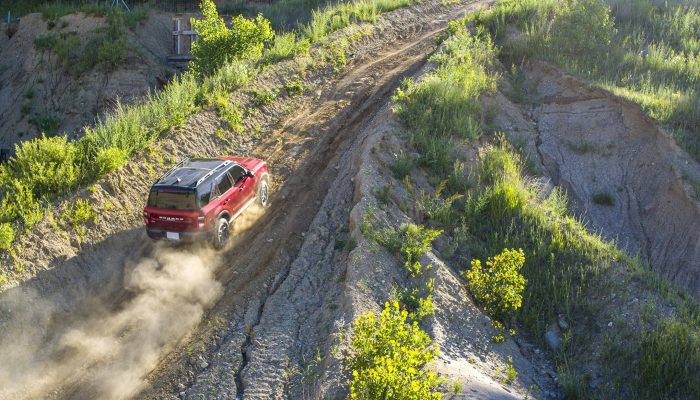 With much marketing hoopla, Ford recently announced two distinct vehicles for the revived Bronco brand.
The recently arrived Bronco Sport will soon be followed by the larger Bronco, both with tough looks and backed up by off-road chops. Without directly saying so, Ford is clearly looking to carve out a piece of the Jeep Wrangler’s turf.
The Bronco Sport is considered a crossover since it uses the same car-based platform as the Ford Escape. The Bronco Sport is about 20 centimetres shorter (but five centimetres wider) and slots between the Escape and the much smaller EcoSport. The bigger Bronco is more of a rowdy off-roader as it gets its body-on-frame chassis from the Ranger pickup.
But just because the Bronco is more beefed-up doesn’t mean the Sport cowers in the face of uncharted terrain. Ford says the vehicle’s suspension has been thoroughly tested over the rough stuff and can stand up to plenty of abuse. Indeed, four-wheel-drive is standard, as is Terrain Management System with Normal, Eco, Sport, Slippery and Sand settings for the Base, Big Bend and Outer Banks trims. The higher-up Badland trim comes with locking rear differentials that can direct power to either or both rear wheels when needed. They also get Mud/Ruts and Rock Crawl modes. Unique front-suspension struts and rear shocks are included.

An available Trail Control system allows you to set the forward speed up to 32 km/h, or up to 10 km/h when in reverse. This allows navigating trails using only the brake pedal.
The shape of the Bronco Sport is also much different than the bigger Bronco. In the flesh, the Sport’s grille looks modernistic and with the squared-off rear-end, the vehicle somewhat resembles the 2020 Land Rover Defender. There are minimal front and rear overhangs, allowing the Sport to approach steep hills and ditches without scuffing bumpers. There’s nearly 20 centimetres of ground clearance and the ability to ford water more than half a metre deep.
The squared-off theme shows up in the interior, where an eight-inch touch-screen is perched upright above the ventilation controls. The floor console is home to a user-friendly gear-selector knob that replaces the traditional shift lever.
The high roofline gives the Sport plenty of rear-passenger headroom and the fold-down bench also flattens for stowing bulky cargo. Ford says two mountain bikes can be loaded straight-up.
The rear window also flips upward from the tailgate and two built-in floodlights help when loading/unloading in the dark.
Powerplant choices are common to the Escape. Base, Big Bend and Outer Banks models get a turbocharged 1.5-litre three-cylinder engine rated at 181 horsepower and 190 pound-feet of torque. It serves the purpose, but requires significant throttle input and is quite coarse at lower revs.
An available turbo 2.0-litre four-cylinder with 250 horses and 277 pound-feet is exclusive to the top-end Badlands model.
An eight-speed automatic transmission is standard across the line.
Pricing starts at $34,200 which is about $2,150 more than a base all-wheel-drive Escape. The entry-level Base is far from low-rent, but opting for the next-up Big Bend adds heated front seats with zippered stowage pockets and a keyless-entry keypad.
The Outer Banks has heated leather seats (power-operated in front), heated steering wheel and ambient lighting.
Along with the four-cylinder engine, the Badlands comes with 28.5-inch off-road rubber, upgraded suspension, underbody skid plates, tow hooks and a front-facing camera (handy when rock crawling).
Although the Bronco Sport is far more capable and substantial than the Escape and has a much firmer ride, those with a penchant for serious off-road traveling should consider either the two- or four-door non-Sport Broncos.
For most buyers, however, the tamer but still tough-enough Sport should do just fine.

What you should know: 2021 Ford Bronco Sport 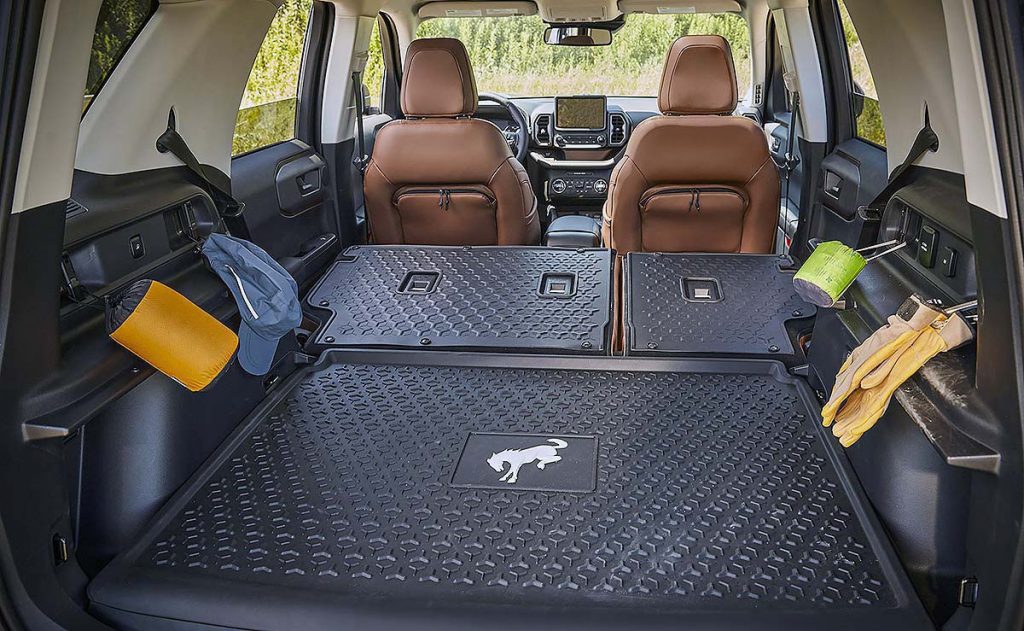 The load floor is flat and Ford says the roof height allows two mountain bikes to be loaded in, straight up.
PHOTO: FORD 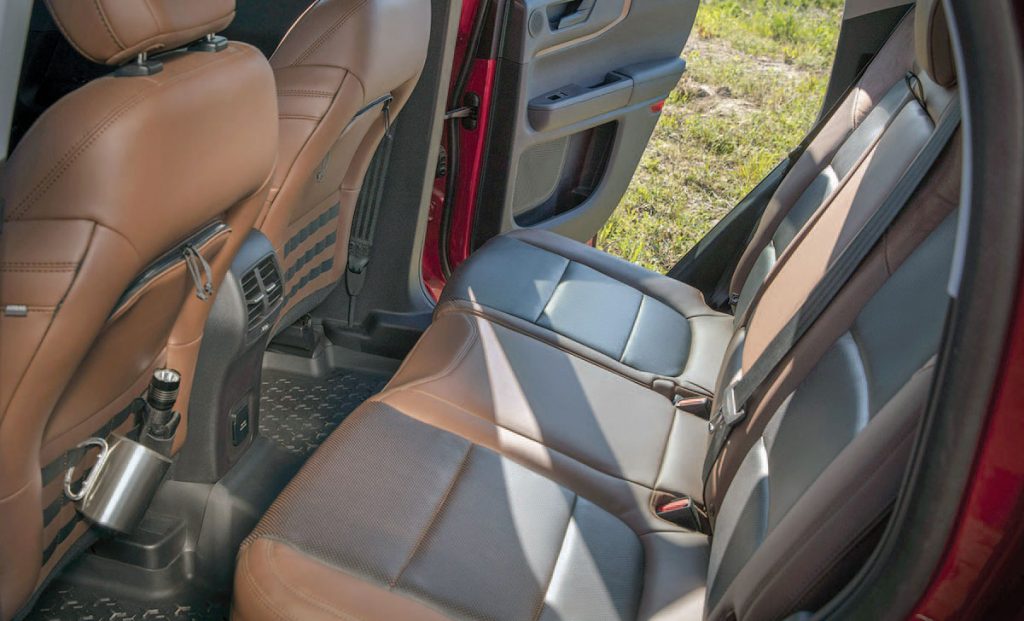 Based on the Ford Escape platform, the Bronco Sport is 20 centimetres shorter, which aids the approach angles during off-roading.
The high roofline provides plenty of rear-passenger headroom.
PHOTO: FORD 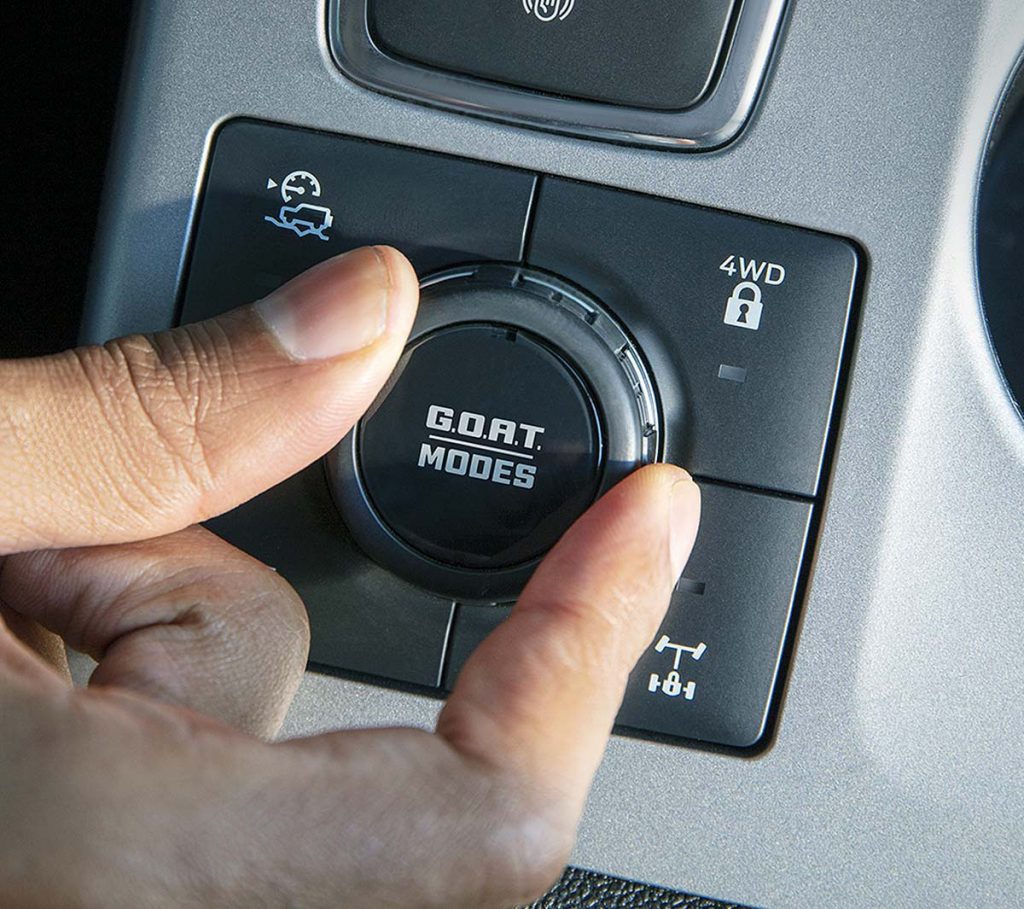 The Terrain Management System has up to seven G.O.A.T. Modes to help drivers “go over any type of terrain.”
PHOTO: FORD 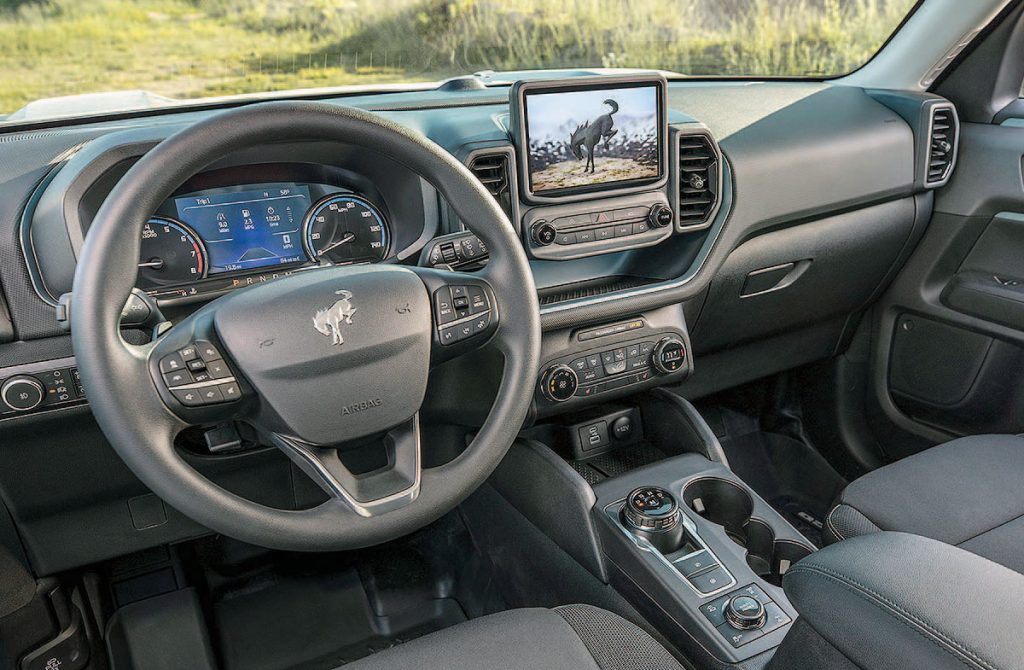 The squared-off exterior styling extends into the interior, where an eight-inch touch-screen is perched upright above the ventilation controls.
The floor console is home to a gear-selector knob that replaces the traditional shift lever.
PHOTO: FORD 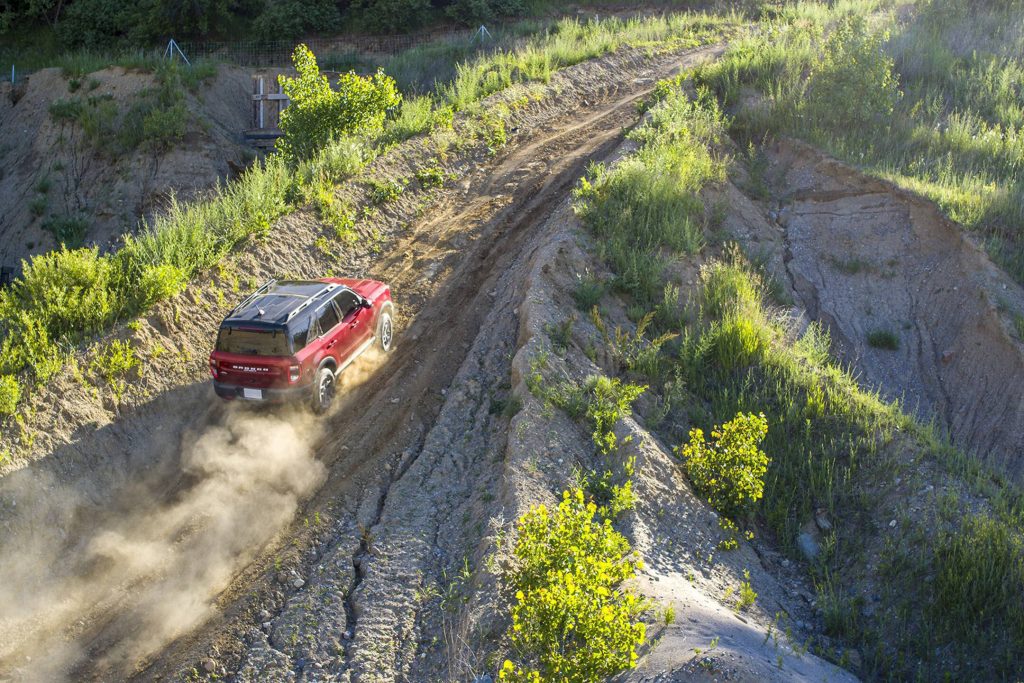 All Bronco Sport models come with all-wheel-drive, although the higher-up Badlands and
First Edition trims come with locking rear differentials that can direct power to either or both rear wheels when needed.
PHOTO: FORD