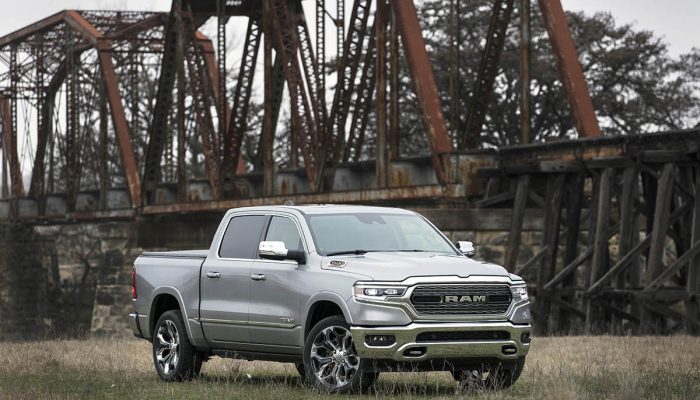 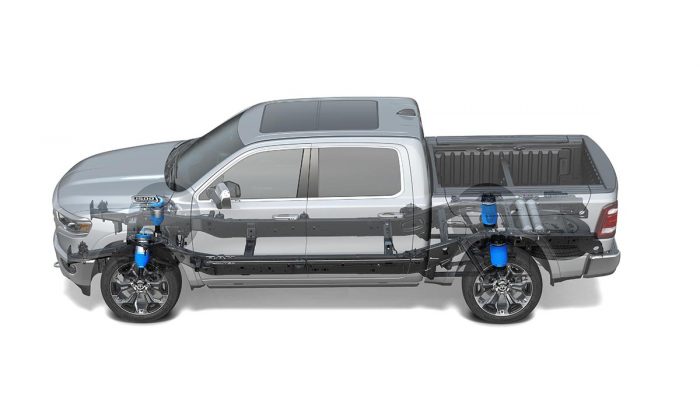 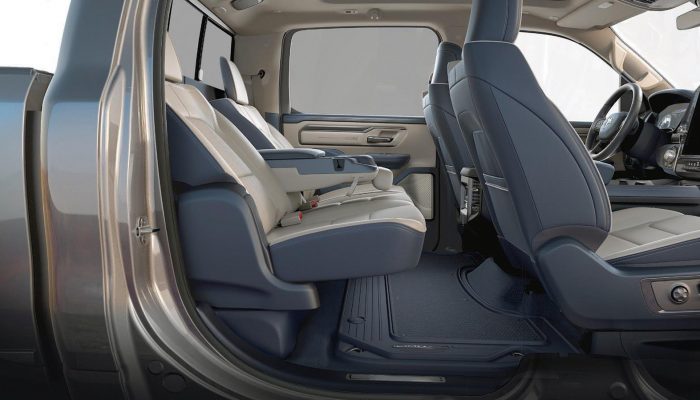 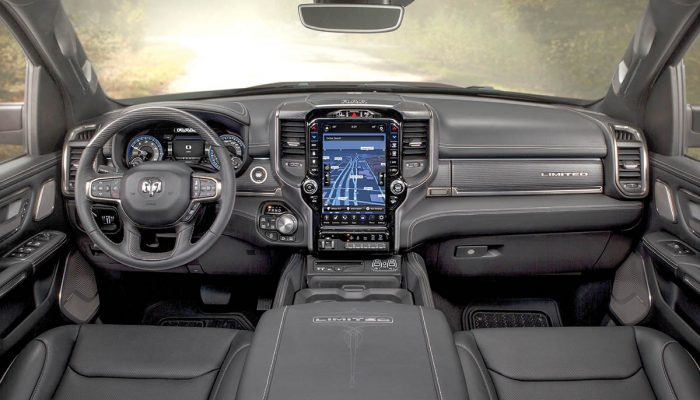 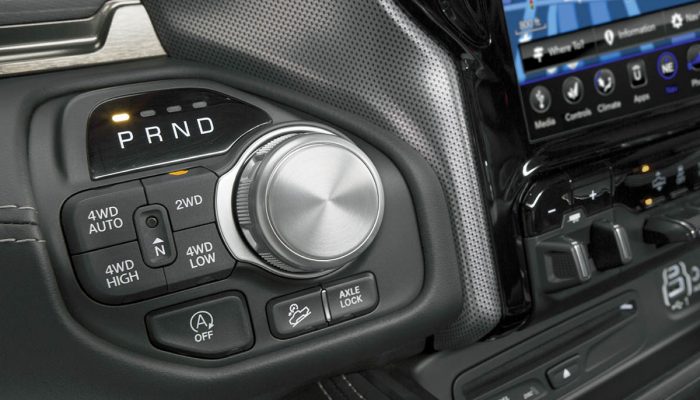 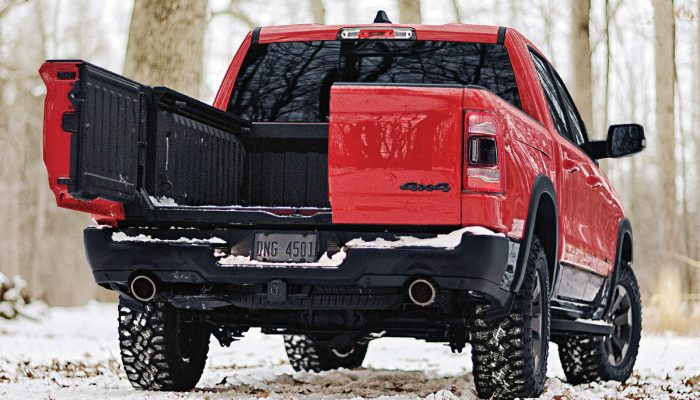 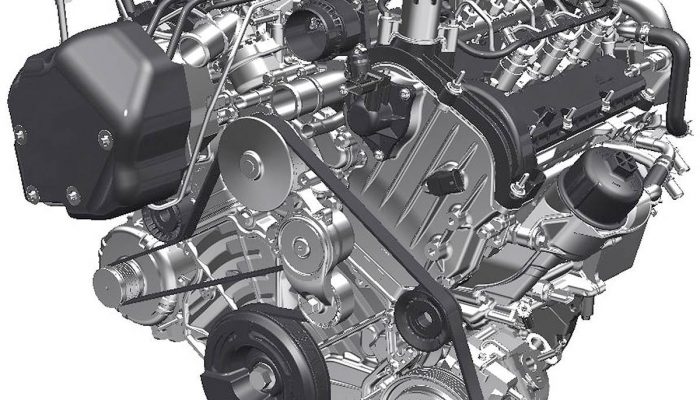 he last two model years have seen the adoption of turbo-diesel engines by all domestic-based light-duty pickup brands. That includes the Ram 1500 turbo-diesel that returns to the group for 2020 following a one-year time-out.  In the automotive world, the pickup category is the most hotly contested. Millions are sold in North America every year. Of those, about 95 per cent are made by Ford, General Motors (Chevrolet and GMC) and the Ram division of Fiat Chrysler Automobiles (FCA). The stakes are huge.

The Ram 1500 has made quite a name for itself lately, winning numerous awards and accolades. That and some aggressive marketing has translated into steady sales growth along with a corresponding increase in respect among truck shoppers.
The only piece missing was the turbo-diesel that disappeared for the 2019 model year, primarily due to emission-related issues. But now the so-called EcoDiesel has returned, with added trailer-tugging and cargo-load capacities. So how do the numbers stack up? The Ram’s made-in-Italy 3.0-litre V-6 puts out 260 horsepower and 480 pound-feet of torque, which is a gain of eight per cent and 14 per cent, respectively. A new turbocharger, redesigned fuel injectors and pistons and increased compression ratio are credited with the improved performance.

The Ford F150 turbo-diesel (also a 3.0-litre V-6) delivers 250 horsepower and 440 pound-feet, and GM’s 3.0-litre inline six-cylinder turbo-diesel in the Chevrolet Silverado and GMC Sierra has 277 horsepower and 460 pound-feet. Yes, the numbers are close, but the Ram holds a definite edge in the crucial torque department.  It’s also a horse race for official fuel economy. GM leads the pack at 8.9 l/100 km in combined city/highway driving, followed by Ram at 9.7 and Ford at 9.8.  The EcoDiesel’s maximum payload and towing capacities have increased to 1,045 and 5,710 kilograms, respectively, from 855 and 4,027 kilograms.

The EcoDiesel can be specified with all Ram body styles and box sizes, including the extended-length Quad Cab and four-door Crew Cab models. A two-door regular-cab version is also available, but only for fleet customers. Most trim levels can be outfitted with the diesel, too, including the Sport and off-road-oriented Rebel.  Aside from the diesel, the Ram is available with a 3.5-litre V-6 that produces 305 horsepower and 269 pound-feet of torque. That can be temporarily increased by up to 90 pound-feet with a belt-drive 48-volt “eTorque” motor/generator. This mild-hybrid system replaces the traditional alternator and uses a lithium-ion battery to add power under hard acceleration.  Optional is a 5.7-litre V-8 that delivers 395 horsepower and 410 pound-feet, and when equipped with eTorque it has slightly more towing capacity than the EcoDiesel at 5,795 kilograms.
All Ram engines are linked to eight-speed automatic transmissions.  Aside from what’s under the hood, the 2020 Ram 1500 has no shortage of tricks up its sleeves to be competitive. The optional air suspension can raise or lower the ride height and keep the truck level when it’s loaded.

Then there’s the trick multi-function tailgate. The split design allows you to open either or both sides, or you can drop the tailgate as a single unit for loading/unloading larger and/or longer objects.  The interior can also be loaded with luxury amenities and a dominating 30-centimetre touch-screen that’s so large it can be split into two screens. It looks intimidating, but the layout is intuitive and the system is easy to use.  Ram EcoDiesel pricing starts at $51,300, including destination charges. That’s about $5,200 more than the base gasoline V-6 and $3,250 more than V8-equipped Rams.  If your work and/or play requirements call for plenty of torque-rich pulling and hauling performance while keeping fuel consumption in check, the updated EcoDiesel option will be most welcome. 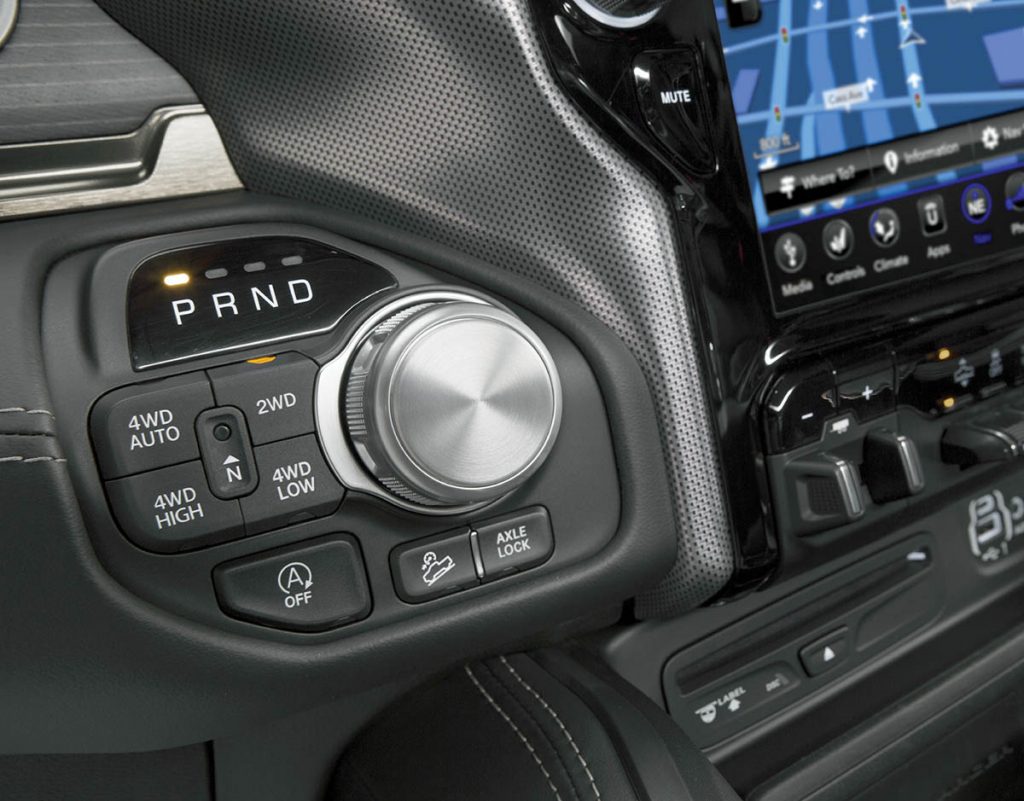 A dial-operated eight-speed automatic transmission is standard with all Ram 1500 engines,
including the EcoDiesel. PHOTO: FCA 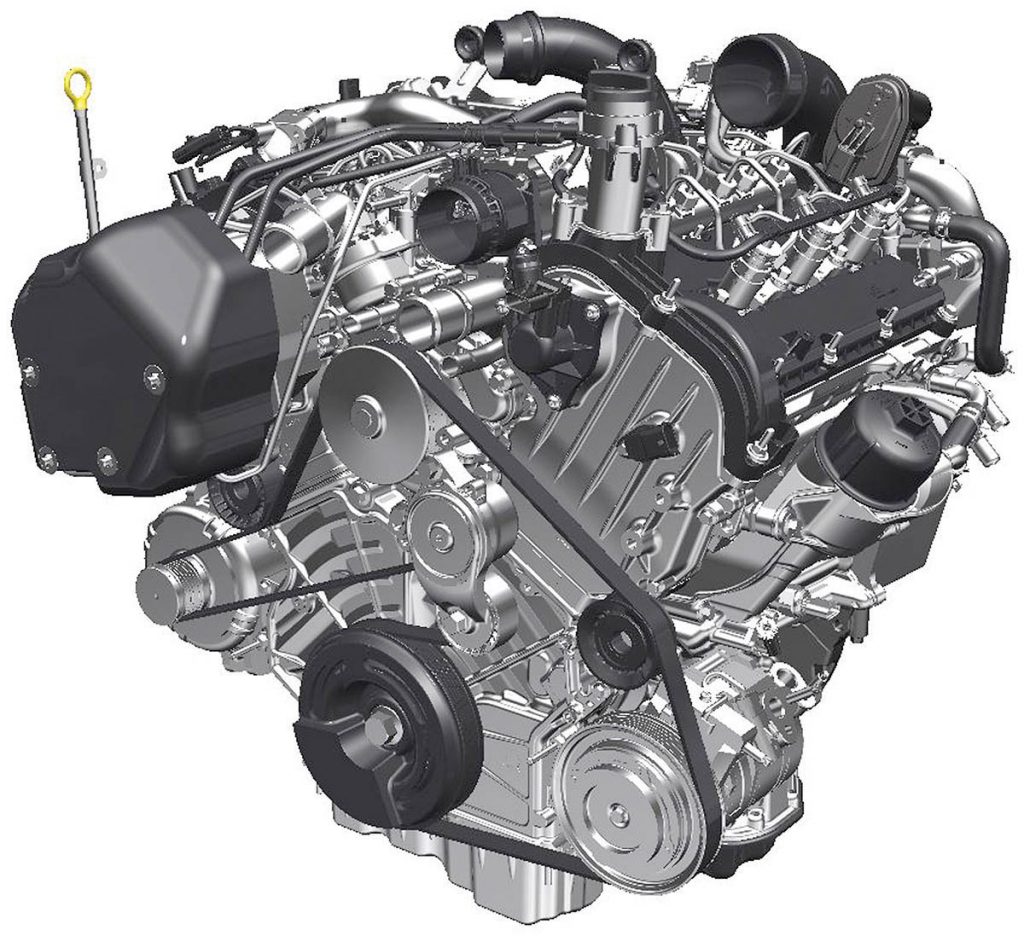 The turbo-diesel 3.0-litre V-6 is rated at 260 horsepower and 480 pound-feet of torque.
The latter number slightly out-muscles the Ford F150 and the General Motors pickups.
PHOTO: FCA 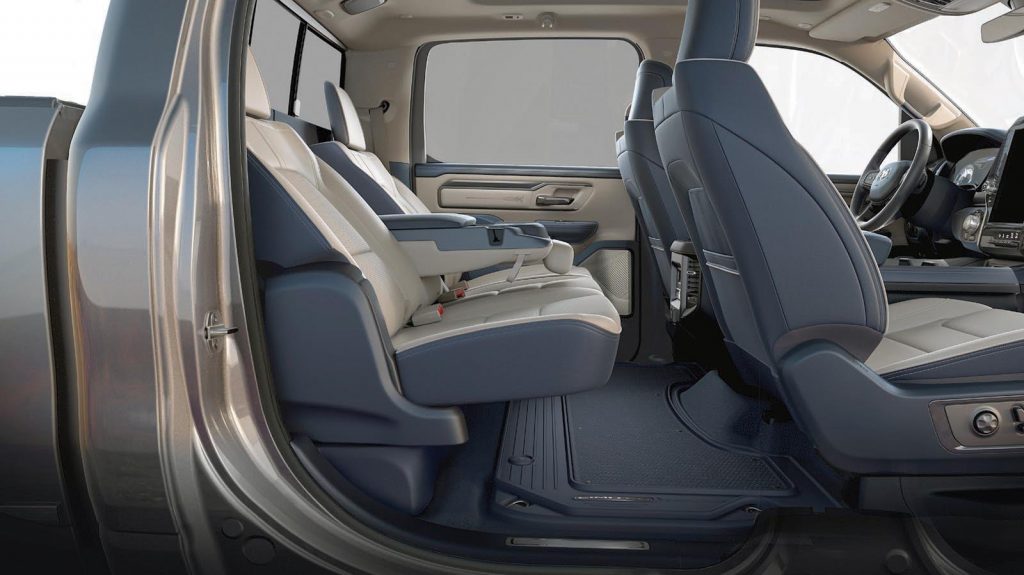 The 2020 Ram 1500 has plenty of tricks up its sleeve, including available reclining rear seats. PHOTO: FCA 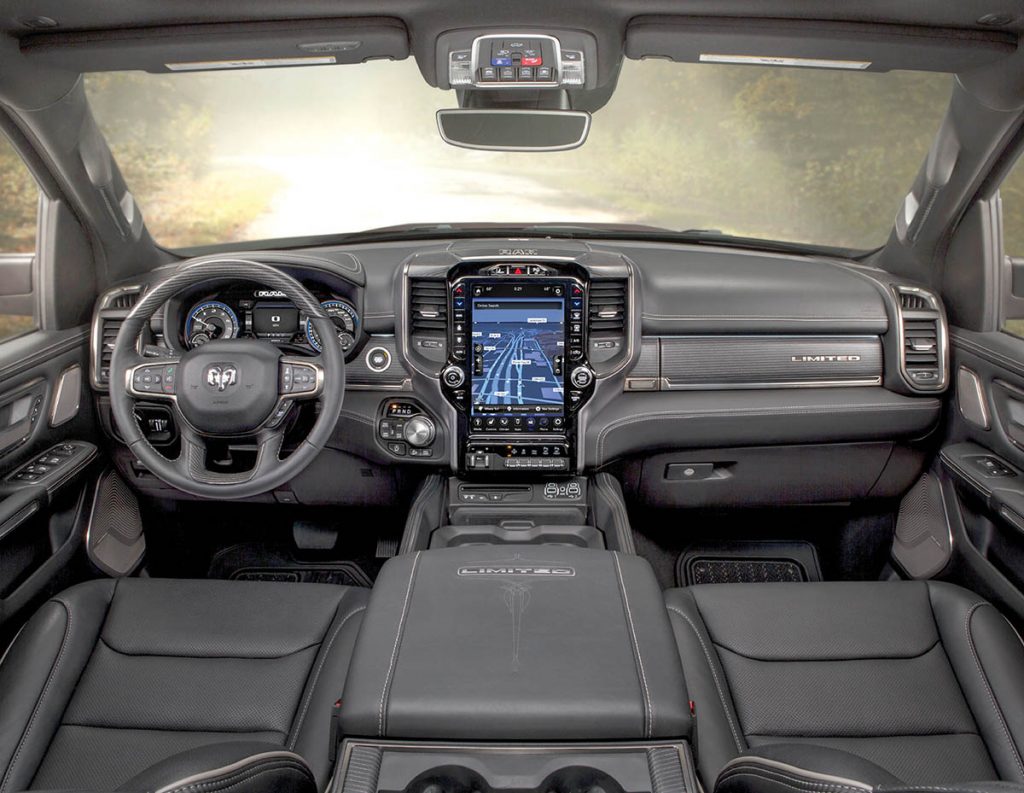 Front and centre in the dash is an optional 30-centimetre display that’s straddled by buttons,
dials and switches. It looks busy and a bit intimidating, but it’s actually intuitive and even fun to use.
PHOTO: FCA 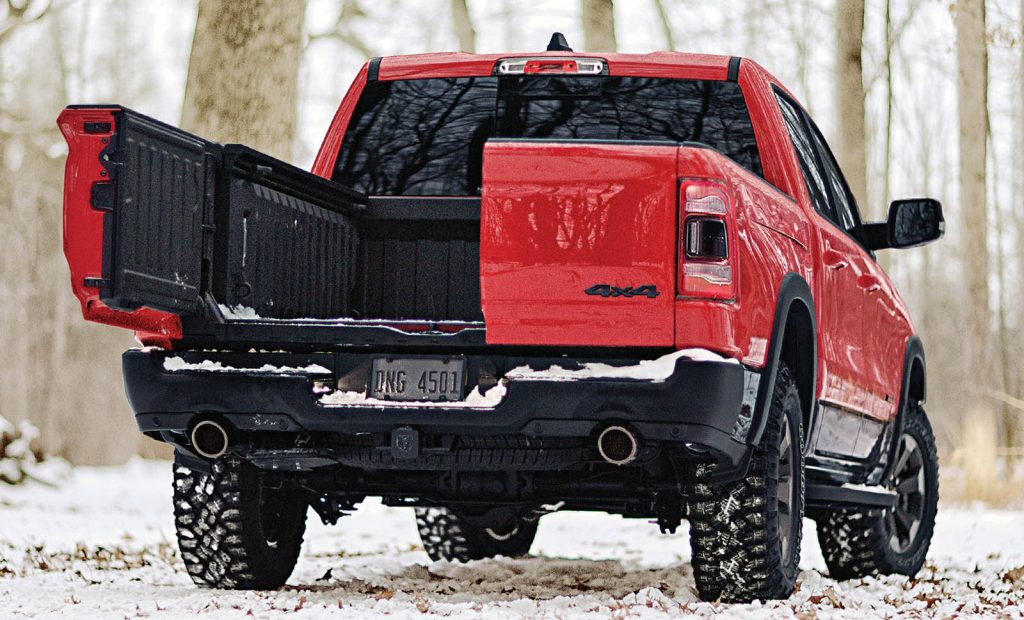 The optional tailgate works like a normal tailgate but it also has swing-out doors.
The right side cannot open unless the left side is open. PHOTO: FCA 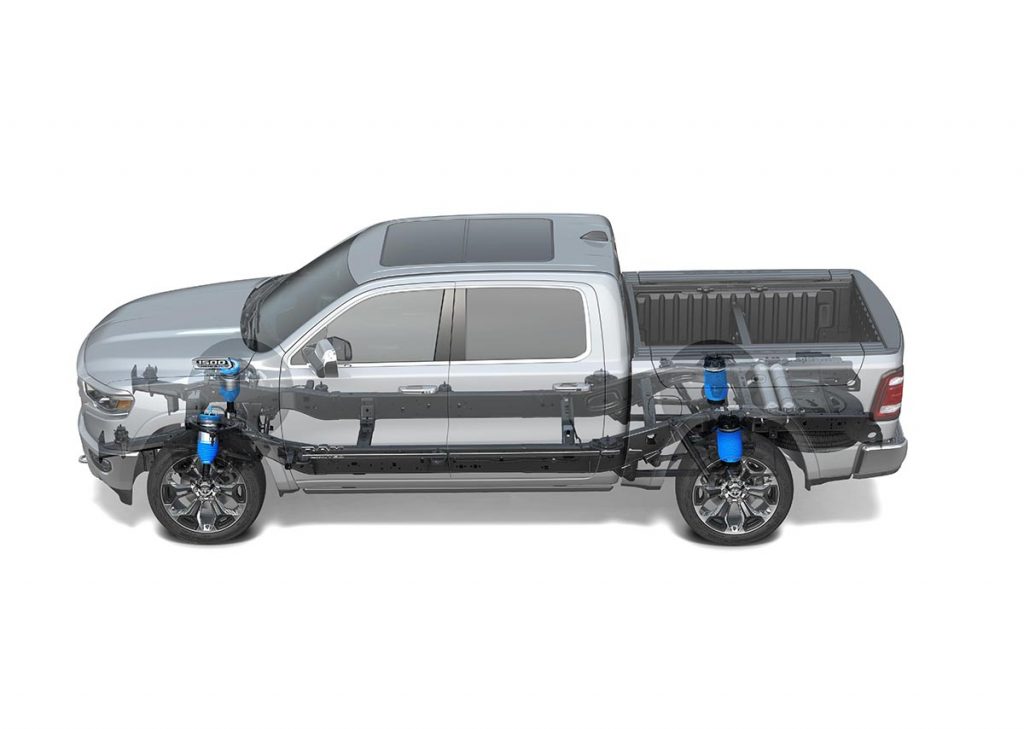 The optional air suspension raises and lowers the vehicle and can also keep it level while
towing or when hauling heavy loads in the box.
PHOTO: FCA

Toyota Tundra
Base price: $42,600
The Tundra and the Nissan do not Titan offer a diesel option for 2020.