My buddy Ken Miller knows what I’m talking about, here.

He posted some pictures on his Facebook page of the interior of his late-1960s Dodge musclecar strewn all over the kitchen of his lovely suburban home.

There’s a running gag about how guys will use the bathtub to clean an engine block, or how they’ll rebuild a small-block Chevy or an entire Harley motorsickle on the living-room sofa. Or how they’ll use the dishwasher to clean parts. (Guilty.)

Of course the kitchen IS the logical spot for such activity. There’s plenty of counter space, hot water, a big sink and a parts washer (that can amazingly clean dishes, too). And, the most important part, there’s a fridge with beer and leftover fried chicken in it.

So, in reality, how can the kitchen in fact NOT become a “race shop” that also happens to have chicken and beer? Well, because there’s usually someone else living with you that has more . . . brains.

Even still, over time – in less than 15 minutes, by my watch – the kitchen can turn into a near-professional facility that  serves (bow down) the Gods of Speed.

Allow me to set the scene. It was a Friday morning that began like any other, except that I was expecting a large shipment from Brembo (the brake company). I’ve been working with the engineers to get a package together to bring my 1991 Acura NSX up to date with the latest technology.

By 9 a.m, five large boxes were in the front entrance and I was itching to bust them open to test-fit the brakes with my new Advan racing wheels. And where would this take place?

The only room with beer and chicken in the fridge, counter space, running water and a parts washer (dishwasher), of course.

By 9:15 a.m., there were boxes, brakes, wheels and chicken and beer everywhere. Hey, it was before noon, so it was light beer. I had a full-on race shop going on, complete with Hot Rod magazines and tools and tons of shiny new parts. And then . . . the cleaning lady showed up to put everything into rather harsh perspective.

“What’s going on? Do you expect me to clean around all . . . this . . . crap?” She was waving her hands like she was trying to levitate the boxes.

Clutching my chicken wing and light beer, I said something like, “yes, I  do believe that YOU will have to clean around THIS.”

I don’t think I’ve ever seen such an eye roll in all my life, and I was married once.

The entire show stayed in the kitchen for a full three days until I became so aggravated with stepping around and over all the stuff just to get a glass of water that I moved all the treasures into the home office. Neatly stacked and out of the way, of course.

“Just think what I can do with the place next week when Janet is away.”

Jeff Melnychuk is Wheelbase Media’s Managing Editor. He can be reached on the Web at www.theoctanelounge.com by using the contact link. Wheelbase supplies automotive news and features to newspapers across North America. 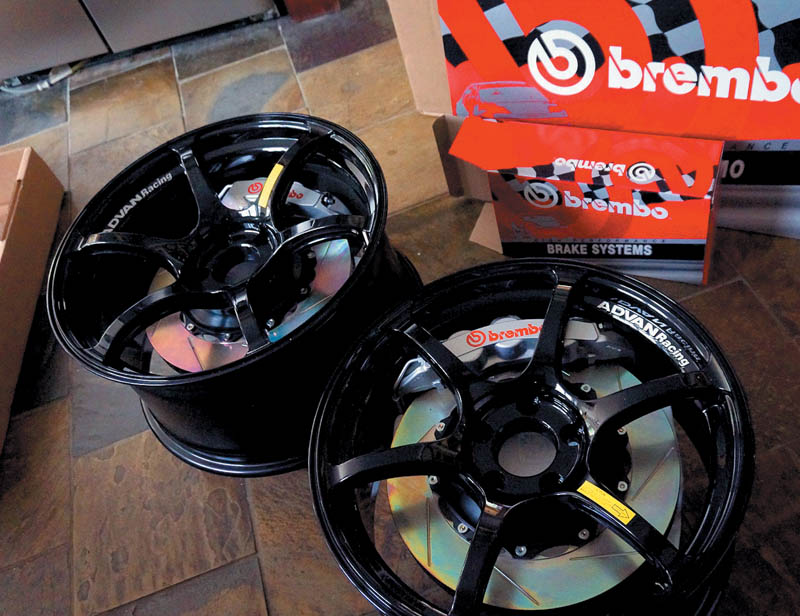 Mountains of boxes, brakes and wheels . . . and chicken and beer. Yes, this is why kitchens were invented in the first place.